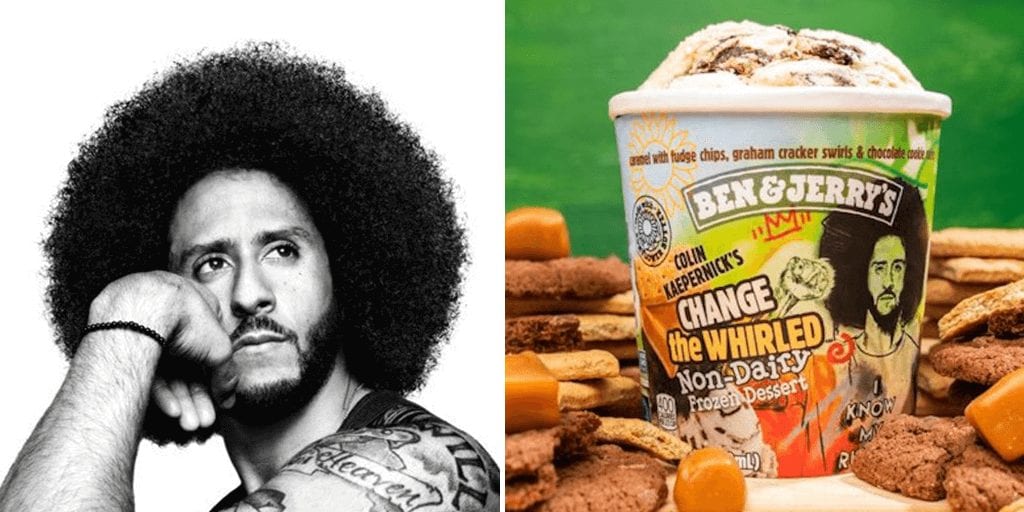 “My hope is that this partnership will amplify calls to defund and abolish the police and to invest in futures that can make us safer, healthier, and truly free.”

According to the company, the flavor “celebrates Kaepernick’s courageous work to confront systemic oppression and to stop police violence against Black and Brown people.”

The vegan ice cream is made using a caramel non-dairy sunflower butter base with fudge chips and graham cracker and chocolate cookie swirls.

‘For a safer, healthier, and truly free future’

Kaepernick’s portion of the proceeds from sales of Change the Whirled will support the work of Know Your Rights Camp, which the athlete founded in Oakland, CA in 2016.

I’m honored to partner with Ben & Jerry’s on Change the Whirled,” Kaepernick said in a statement.

“Their commitment to challenging the anti-Black roots of policing in the United States demonstrates a material concern for the wellbeing of Black and Brown communities.

“My hope is that this partnership will amplify calls to defund and abolish the police and to invest in futures that can make us safer, healthier, and truly free.”

The new flavour will be a permanent addition to Ben & Jerry’s wide variety of super-premium ice cream line up.

Matthew McCarthy, CEO of Ben & Jerry’s added: “Colin Kaepernick and his Know Your Rights Camp is the perfect partner for Ben & Jerry’s to continue to advance our work on issues of racial justice.

“Ben & Jerry’s is proud to diversify our flavor portfolio by honoring Kaepernick with a full-time flavor.

“We deeply respect how Colin uses his voice to protest racism, white supremacy and police violence through the belief that ‘love is at the root of our resistance. We have tremendous hope in what we can accomplish together.”

The vegan ice cream will be available at Ben & Jerry’s Scoop Shops and on store shelves nationwide in the United States beginning in 2021 for around $5.49.

The flavour will also be rolled out to Ireland, the UK, Germany, Switzerland and the Netherlands in the coming months.