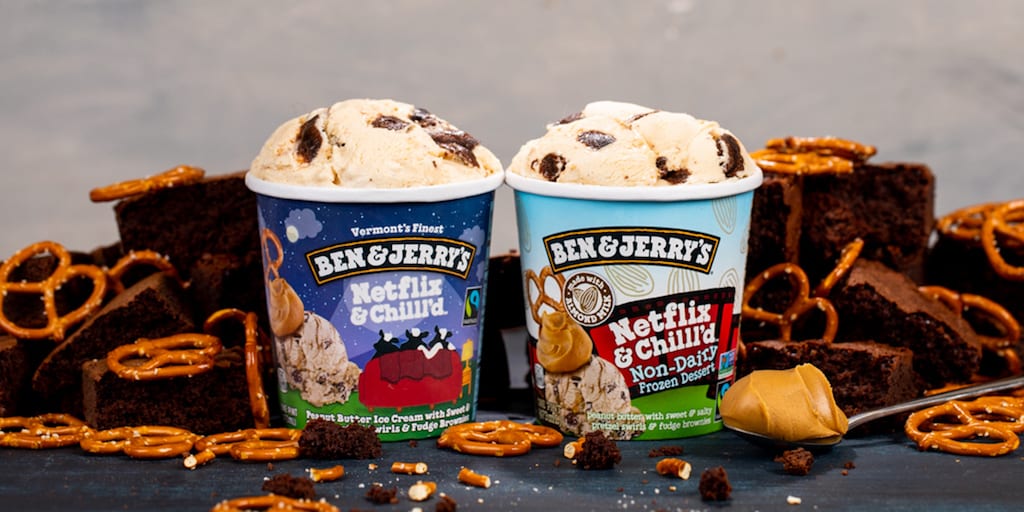 In a first-time collaboration with Netflix, the Vermont-based ice cream company has released a flavor to capture the essence of the cult phrase-“Netflix and chill.”

“There’s something for everyone to watch on Netflix & flavors for everyone to enjoy from Ben & Jerry’s, so we’ve teamed up to bring you a chillaxing new creation that’s certain to satisfy any sweet or salty snack craving. It’s a flavorful world, and everyone is invited to grab a spoon,” reads the brand’s website.

The newest flavor Netflix & Chilll’d will be launched around the world, which includes the US, Australia, Brazil, Germany, France, UK and 20 other countries.

The company posted an image of the new flavor on social media with a caption that reads: “With the perfect mix of peanut butter intrigue, pretzel drama, and fudge brownie belly laughs, NEW Netflix & Chilll’d™ pairs well with any of your Netflix programming.”

“I’m so excited there’s a non-dairy version! I’ll be able to try and enjoy this new flavor too! Thank you, @benandjerrys, for making your flavors accessable to those of us who can’t or don’t consume milk products,” wrote one Instagram user.

“Thank you for making a vegan one!! So excited ??,” commented another.

“Yesss ty for making a non-dairy one ?❤️,” added a third.

It has since released vegan flavours every year to expand the range to a total of 12 almond milk-based pints.

Ben & Jerry’s snackable packs of sweet cookie dough chunks have been mass favourites since they were launched last April following a huge demand for the brand to release “just the chunks” by avid fans.

Will you try the new Netflix & Chilll’d flavour? Share your thoughts in the comments below!