Beyond Meat debuts its plant-based beef in Canada 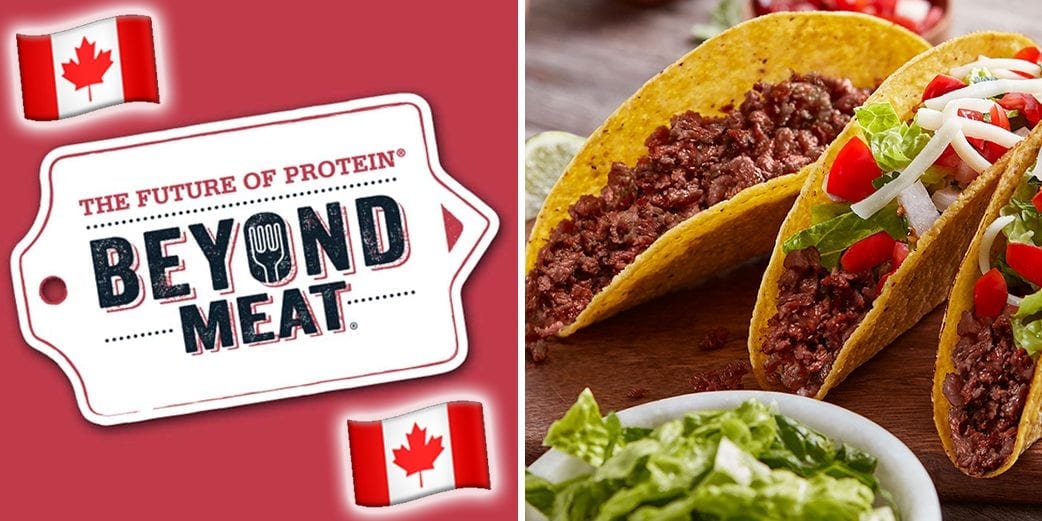 Image: Beyond Meat / Edited by TotallyVeganBuzz

Canada has become the first market outside the U.S. to sell Beyond Meat’s ingenious vegan beef product.

California-based startup Beyond Meat entered Canada in May with the launch of the Beyond Burger and within six months, the company’s latest product, Beyond Beef, has been made available at stores across the country.

The company states that its newest invention is made from organic plant ingredients free from GMO, soy and gluten. The fake meat has been developed to mimic the flavor, texture and succulence of traditional beef with cocoa butter used to achieve the ‘marbling effect’ often seen in the meat counterparts. The butter serves to “melt and tenderize for a satisfying and delicious at-home cooking experience.”

There’s always something to be thankful for… like these easy-to-make #BeyondBeef Stuffed Mushrooms! Perfect for Friendsgiving ? __________________ Full recipe linked in bio.

Beyond Meat’s plant-based beef is said to deliver 18g of protein per 100g serving and has been fortified with iron. The plant-beef is also healthier with 35% less saturated fat and free from cholesterol, antibiotics or hormones.

Speaking on the launch, CEO Ethan Brown said: “Canada is a very progressive market and since launching in retail there earlier this year, we’ve seen a tremendous response from Canadians who are interested in our plant-based proteins,” in a release.

“We are excited to bring our latest product innovation to Canadians, welcoming a growing number of consumers to the delicious taste and nutritional and environmental benefits of our plant-based proteins.”

Beyond Meat products have been very well received in Canada. Within merely six months of launching its Beyond Burger, the company scaled its distribution to more than 4,000 stores.

This surge in sales has prompted other fast-food giants to follow suit. In September, McDonald’s announced a special recipe using Beyond Meat patties.

Other chains including  Burger King, Tim Hortons, KFC, and Dunkin’ also have the Beyond meat patty on their plant-based menus.

Have you tried the new plant-based beef from Beyond Meat? Share your thoughts in the comments below!