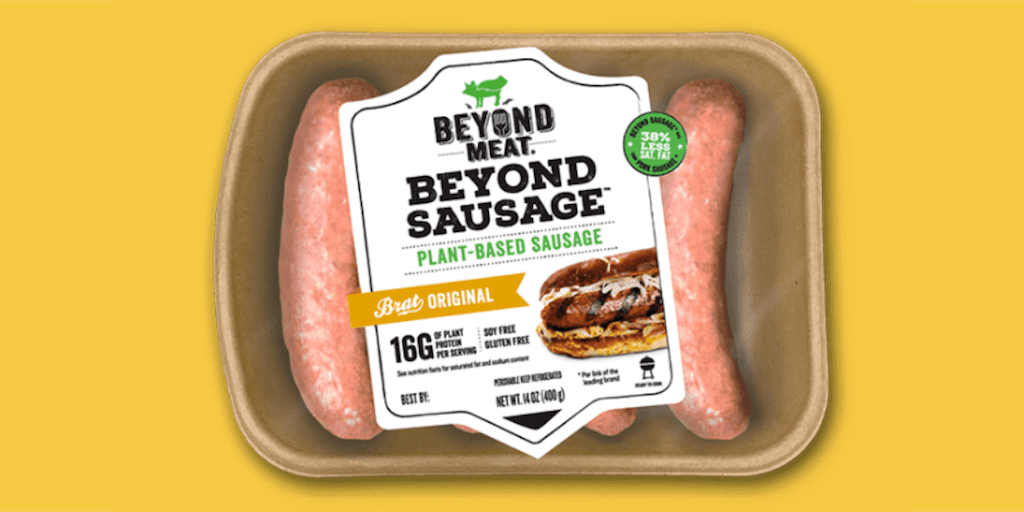 Tesco has partnered with Beyond Meat to bring the company’s plant based sausages to 458 stores across the UK.

After introducing the Beyond Burger last year, the UK’s biggest supermarket chain will add the Beyond Sausages on September 26.

The vegan pork sausage packs in 16 grams of protein and has been created from peas, fava beans and rice, with added beetroot and coconut oil to mimic the taste and texture of meat.

The sausages are soy, gluten and GMO-free with the ingredients held together in an algal casing.

Beyond Meat’s CEO and co-founder Ethan Brown is confident the sausage will deliver on “the juicy, sizzling & delicious satisfaction of a pork sausage”.

He said: “This has taken years to develop and we believe that the difference between a real sausage and Beyond Sausage is indistinguishable.”

The sausages will be available at £4.95/for two, though Brown hopes to make them cheaper once the brand shifts its production to its new factory in the Netherlands, due to open at the start of next year.

He told The Grocer: “It’s a very big goal of mine to make these products more affordable. The challenge is that our scale is so small, but as we achieve greater scale in our supply chain, I have every confidence we can lower that price compared to other plant-based products and animal proteins.”

Beyond Meat follows in the footsteps of several other food giants to launch vegan sausages, such as Quorn vegan Cumberland sausages and Heck vegan sausages, but the brand said Beyond Sausages are ‘the best product of its type on the market’.

What is the best vegan meat brand? Share your thoughts in the comments section below!