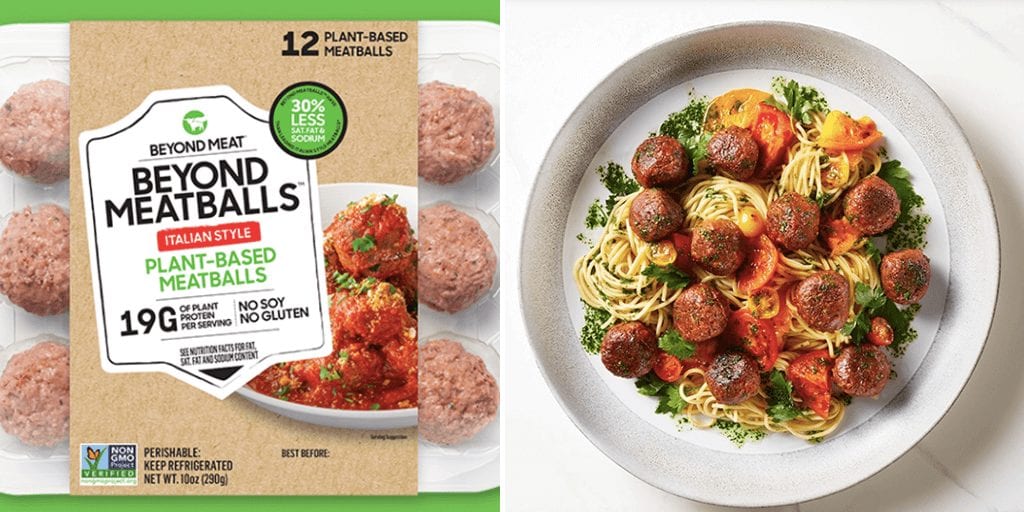 This week, Beyond Meat has launched its new line of pre-formed plant-based meatballs at retailers across the U.S.

In addition, the plant-meatballs described as having a ‘juicy, meaty taste and texture, with a versatile flavor profile perfect for pastas, sandwiches, pizzas, soups and more’ are free of cholesterol, antibiotics and hormones.

The balls pre-seasoned with a blend of Italian spices will initially roll out in Whole Foods Market, Stop & Shop, Sprouts, Harris Teeter, Kroger, Albertsons in 12-meatballs packs for a suggested retail price of $6.99.

Open. Saute. Simmer. Meal prep just got that much easier. Introducing Beyond Meatballs, rolling out to stores this month. @WholeFoods, @Krogerco, @sprouts, @stopandshop, @harristeeter, @albertsons, and more! Link in bio to learn more.

“We’re thrilled to introduce Beyond Meatballs as they deliver on consumers’ growing demand for delicious and nutritious plant-based meat options without GMOs or synthetic ingredients,” said Beyond Meat’s chief marketing officer Stuart Kronauge

“We are proud to introduce our newest innovation at retailers nationwide and know our fans will be excited about the great taste and convenience of Beyond Meatballs.”

The plant-based meat giant’s newest product is its third grocery offering in the U.S. this year with the Beyond Breakfast Sausage and a value pack of its beef-free burgers called Cookout Classic in a bid to offer easily attainable and affordable plant-based options for the barbeque season, released earlier.

In August, the company also introduced its direct-to-consumer sales option online to be able to sell its vegan burger meat directly to consumers in any of the 48 contiguous U.S. states.

Share this story to let others know about Beyond Meat’s plant-based meatballs.