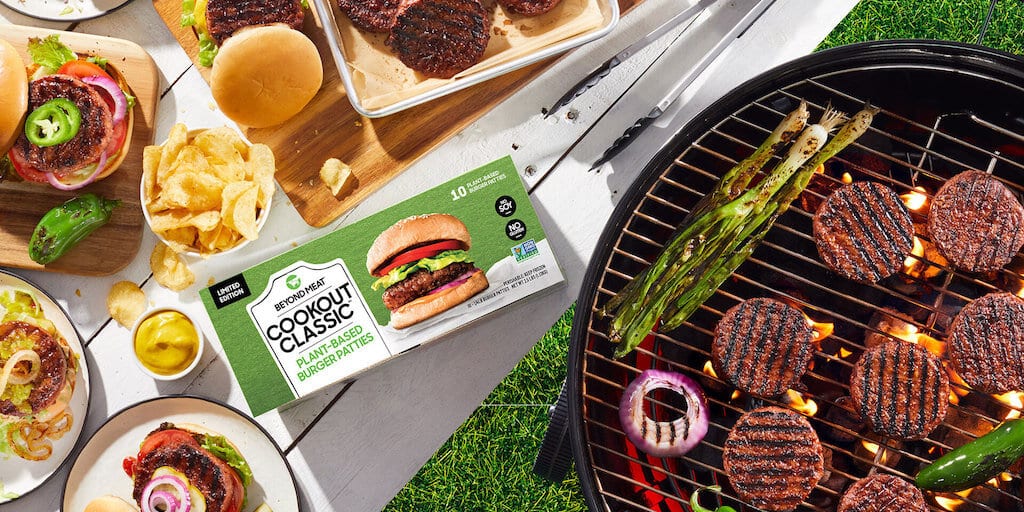 ‘We know that to be successful we have to win on taste, win on nutrition, and ultimately win on price’

From next week, Target, Walmart and some other selected retailers will sell Beyond Meat’s limited-edition value pack of vegan burgers called Cookout Classic, which the company has released in a bid to offer easily attainable and affordable plant-based options for the barbeque season.

“With growing consumer interest in plant-based protein, the Cookout Classic value pack is designed to inspire a shift to plant-based meat at barbecues and summer gatherings,” the company said in a statement.

“The juicy and delicious burgers are made with simple, plant-based ingredients without GMOs, soy or gluten, and are packaged in a fully recyclable cardboard carton, aligning with Beyond Meat’s commitment to sustainability.”

Beyond Meat also aims to fill the void left by the meat industry after the pandemic created huge fractures in its supply chain.

While high infection rates in slaughterhouses forced the closure of several US meat processing plants in early April, the subsequent lockdown dried up meat demand as eateries shut down including school canteens, restaurants, and fast-food chains.

According to reports, pandemic related events and resulting price spikes due to decreased supply have tilted customer preferences towards plant -based protein. A Neilsen report showed that sales of fresh meat alternatives soared 168.5% in the week ended June 6 compared to the year-ago period.

Beyond Meat intends to further slash prices to sway more people to try plant-based meat through special discounts through July 4 on its products at stores such as Kroger, Publix, Albertsons, Whole Foods Market, Shoprite, Giant Foods, and Stop & Shop.

“We know that to be successful we have to win on taste, win on nutrition, and ultimately win on price,” Beyond Meat’s chief growth officer Chuck Muth, told CNN Business.

“If we can do those three things, we see tremendous opportunity to transition consumers from animal-based to plant-based meat.”

“With America facing meat shortages for the first time since World War II, we want to make it as easy as possible to get Impossible Burger — whether you shop in person at your local supermarket, with Instacart or other delivery services, or direct online,” said Impossible Foods’ President Dennis Woodside in a statement at the time.

He added: “So there is plenty of demand from consumers at the current price. And, of course, as the price comes down, eventually it’s going to be game over for the animal ag industry.”

Share this news to let others know of Beyond Meat’s limited-edition value pack of vegan burgers.