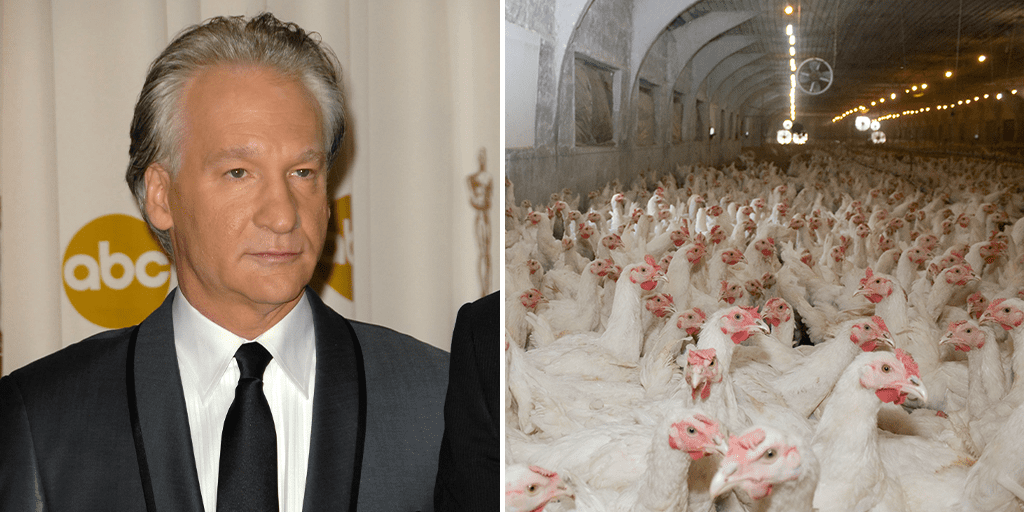 ‘You can’t trash the environment, including animals, and not have it come back and kill you’.

Referencing his recent rant, in which he received bilateral praise for bashing China on reopening its wet market, he called out the U.S. industrial animal agriculture stating: “America’s factory farming is just as despicable as a wet market and just as problematic for our health.”

“Factory farms have a lot more lobbyists, but ecological timebombs tick the same. Americans should not get too high and mighty about wet markets while we are doing this.”

While the novel coronavirus has been widely linked to a wet market in Wuhan, China, Maher stressed that factory farms were just as guilty of spreading diseases as well as subjecting animals to insurmountable torture.

“That’s the lesson that we keep refusing to learn,” he said.

“That you can’t trash the environment—including animals—and not have it come back and kill you.”

To prove his point, he cited examples of AIDS, Mad Cow and Bird Flu as some of the many infections that have spread to humans from animals.

In fact, the Centers for Disease Control estimates that nearly 75 percent of all new or emerging infectious diseases in people are spread from animals.

Highlighting the irony in trying to contain the coronavirus, he said: “To thwart the coronavirus, we’ve been told to create distance, avoid others who are sick, lower stress, and exercise. Are you surprised that diseases flourish among animals when they are forced to live in conditions that are the complete opposite of all of that?

“They are on top of each other, they can’t move, they’re stressed out, I’ve seen airports treat luggage better than we treat animals. Egg laying hens are starved, and given no water for weeks, to shock their bodies into molting, beaks of chickens are removed. I could go on…”

Although individuals and organizations are pressurizing authorities to globally ban wet markets, he challenged his viewers to visit one giant poultry processing factories in the US, to see the plight of the animals hoarded there.

He continued that people couldn’t because AG-GAG laws in several states, including North Carolina and Iowa criminalize reporting animal abuse on factory farms.

The 64-year-old continued: “it is a crime of animal abuse that goes on in our food industry.

“Eighty percent of pigs have pneumonia when they’re slaughtered because we make them live in conditions that would make a zombie vomit.

“And then so that they don’t die before we kill them, (they’re) pumped full of antibiotics that in turn get passed onto humans,” leading to antibiotic resistant diseases killing humans with “ever evolving contagions.”

He concluded by saying: “Let me put it as basically as I can. If we keep producing food the way we do, you’re going to get sick with something medicine cannot fix. You don’t have to care for the sake of the animals; I wouldn’t want to mess with anyone’s reputation as a heartless a–hole. But do it because animal cruelty leads to human catastrophe.”

Share this article to reveal the reality behind factory farms.