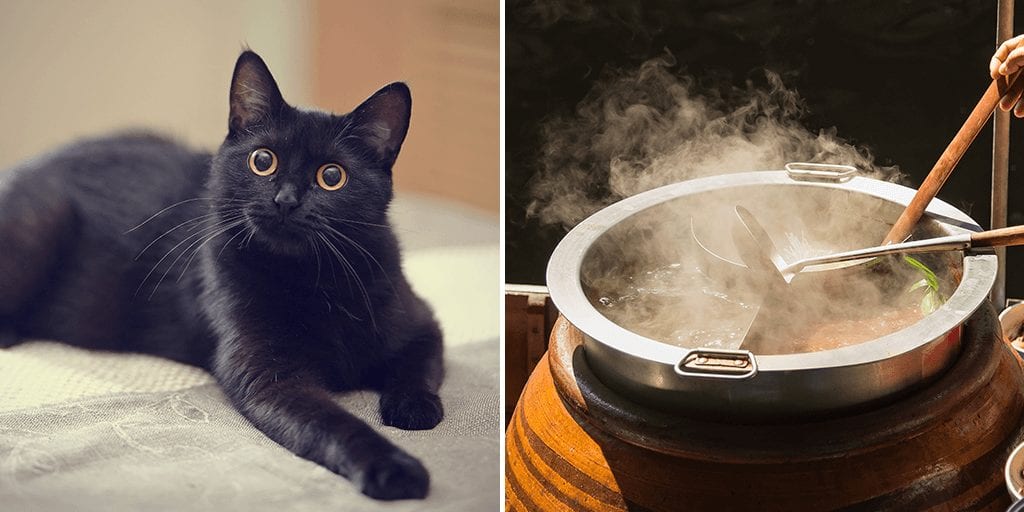 ‘Our human fears about this pandemic should not be used as an excuse to treat defenceless animals who look to us for protection, with utter contempt.’

According to horrific footage obtained by No to Dog Meat charity, black cats are being boiled, skinned, and then grounded into a paste sold as a new cure to coronavirus in Vietnam.

While this cure is being promoted in the country’s capital Hanoi, bottles of the ‘remedy’ are also being sold online.

The activist group captured some graphic videos and images of  the cat-paste production, where one clip shows  a cat being placed in a cooking pot with boiling water being poured over it. Another video shows rows of dead cats drying under the sun after being slaughtered.

Other distressing images captured include the alleged medicinal black paste procured  by the grinding up the cooked animals. One image also shows  a baby  drinking the concoction.

The footage is so distressing that Julia de Cadenet, founder of the charity, said it made her blood run cold.

“People all over the world are understandably terrified of COVID-19, but this does not excuse the horrific cruelty that Vietnamese people are inflicting on these poor cats,” she said.

The novel coronavirus is believed to have originated from a wet market that sells live and slaughtered animals for human consumption in Wuhan, China last December.

Experts believe the virus  jumped to humans from one such animal host prompting China to ban the wildlife trade.

Even as other countries are taking measures to reduce the sale and consumption of live animals, reports claiming that dog and cat meat possess properties to help fight off viruses has spiked sales of dog and cat meat through food delivery apps in Vietnam and Cambodia.

The baseless reports are further backed by doctors  of the region recommending the animals’ meat for its  “natural properties” to fight the virus.

The mixture is said to be highly sought by infected patients or those hoping not to catch it.

According to Cadenet it is ludicrous people would believe it to be a cure since there was no evidence  that eating cats could cure coronavirus.

“Even if there was, this inhumane treatment is a level of cruelty that is unacceptable even for those who eat meat,” she continued.

“Our human fears about this pandemic should not be used as an excuse to treat defenceless animals who look to us for protection, with utter contempt.”

Although China levied a ban on wildlife consumption, the health ministry published a list of recommended traditional and Western treatments for the virus last month.

And one of the six traditional Chinese treatments included in the guidelines is Tan re Qing made from bear bile, goat horn powder and herbs.

“Aside from the irony of promoting a wildlife product for treatment of a disease which the scientific community has overwhelmingly concluded originated in wildlife, the continued promotion of the use of threatened wildlife in medicine is hugely irresponsible in an era of unprecedented biodiversity loss, including illegal and unsustainable trade.”

Cadenent and several other animal advocates have warned that these new trends carry a very high risk of new illnesses spreading and stricter measures need to be implemented  to curtail these unsanitary practices that are potential breeding grounds of future pandemics.

Share this story to reveal the truth behind illicit remedies using animal ingredients.