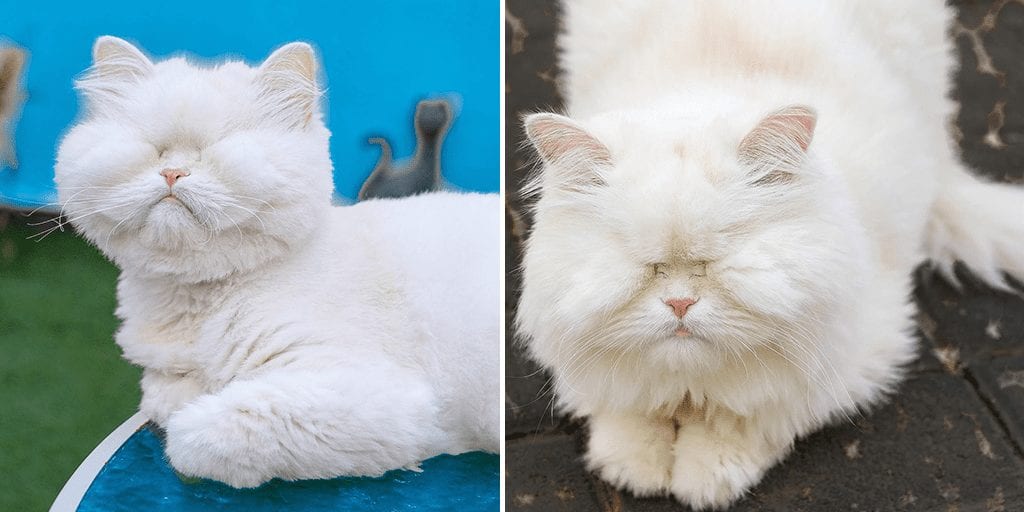 A cat who was so badly neglected by pet shop owners that she went blind has taken the internet by storm and is now raising money for animal sanctuaries.

Moet was born in Oman and spent the first years of her life in a small, filthy cage in a country with little animal rights protections.

She was horrifically mistreated, denied food and water and her health deteriorated so rapidly that she completely lost her sight.

But Moet’s fortunes turned around when a woman handed her in to a local charity – who were forced to remove her decaying eyes.

Happy Sunday sweeties! . Thank you for all of your lovely messages. I ate a small breakfast and so far kept the antibiotics down too. But I still sound raspy. I’m really hoping that the fluid clears and the antibiotics prevent any pneumonia. Please keep your paws crossed for me. And I’m sending purrs to all those who are ill or need them. ???

But since then the Persian cat has gone from strength to strength and the charity has rehabilitated Moet into the photogenic kitty she is today.

The charity who saved 1-year-old Moet found the perfect owner for her in Emily.

When Emily arrived at the rescue centre, Moet was instantly affectionate and the pair have been inseparable since.

Since then Moet’s striking shots and heartwarming story have gone viral and helped raise awareness and funds for many animal rescue operations around the world.

The Persian kitty is now six years old and has more than 30,000 followers on Twitter and 45,000 on Instagram.

Happy #throwbackthursday to my short floof! Do you prefer my long or short look??

It’s finally Friyay and time to fluff out! Ooops, I mean chill out.

After seeing Moet’s raging success, her owner Emily told The Metro: “I realised that I could do more and felt a sense of responsibility around the awareness she could create.

“There are loads of blind cats in shelters who are unnecessarily euthanised every year because people think they are ‘unadoptable’. This is simply not the case, which is what we try to show so that more are adopted into loving, caring homes.”

Emily has begun selling Moet merchandise, with all of the proceeds donated to help the strays of Oman.

“It’s important, though, to remember that so-called ‘special needs’ cats are a responsibility and may require care over and above a ‘normal’ cat. As long as people go into it with their eyes open (pardon the pun) and for the right reasons, they will be richly rewarded,” Emily added.

Share this article to help raise awareness for the needs of stray animals around the world. What should be done to help stray animals? Share your thoughts in the comments section below!