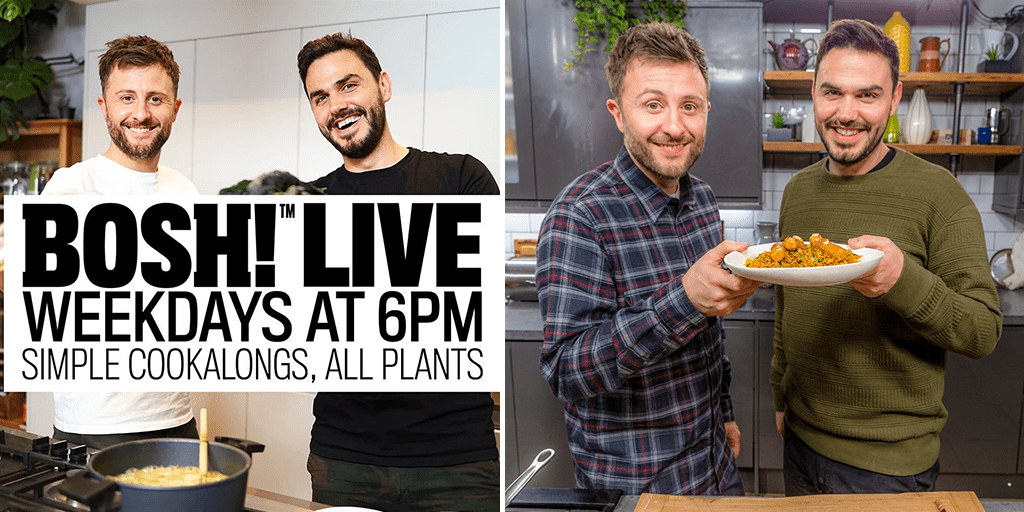 Vegan foodies behind Bosh! fame have launched a live cookalong broadcast to invite people to cook plant-based meals with them during lockdown.

Popular vegan cooks- Henry Firth and Ian Theasby behind BOSH! fame have launched a live online cookalong series to help people whip up “some amazing, easy, insanely tasty dishes, that are all made from plants,” while under lockdown.

The duo have announced that they will cook meals from their own recipe books every weeknight at 6pm (BST), which will be livestreamed on their YouTube channel throughout April.

From 6-10 April, the chefs will cook recipes such as Crazy Potatoes With A Twist, Guacajacks, Shepherd’s Potato and Bacon Cheeseburger Hasselback Potatoes.

The ingredients list has been shared in advance for people who’d like to cook along during the week.

Describing the chosen recipes as “brilliant new ideas you can add to your weekly menus”, the duo added: “From our kitchen to yours, we hope to see you cooking along with us.”

The two have been friends since their Sheffield school days. They converted to veganism in 2015 after watching the documentary -Cowspiracy that highlighted the role of animal agriculture on climate change.

Later the BOSH boys posted their first recipe video online in June 2016 and soon attracted a fan following for their plant-based spin on everyday recipes that typically included meat and dairy.

Their debut vegan cookbook released in April 2018 sold more than 80,000 copies in the UK within 15 weeks of its release.

Last year they launched-How To Live Vegan, a guide to surviving without animal products.

In an interview with The Star, Theasby said: “I think people are a lot more conscious of what they are putting inside themselves.

“The conversation around plant-based food has got really loud of late, and our recipes are the sort that appeal to everybody.”

Share this story to encourage others to cook vegan meals during lockdown.