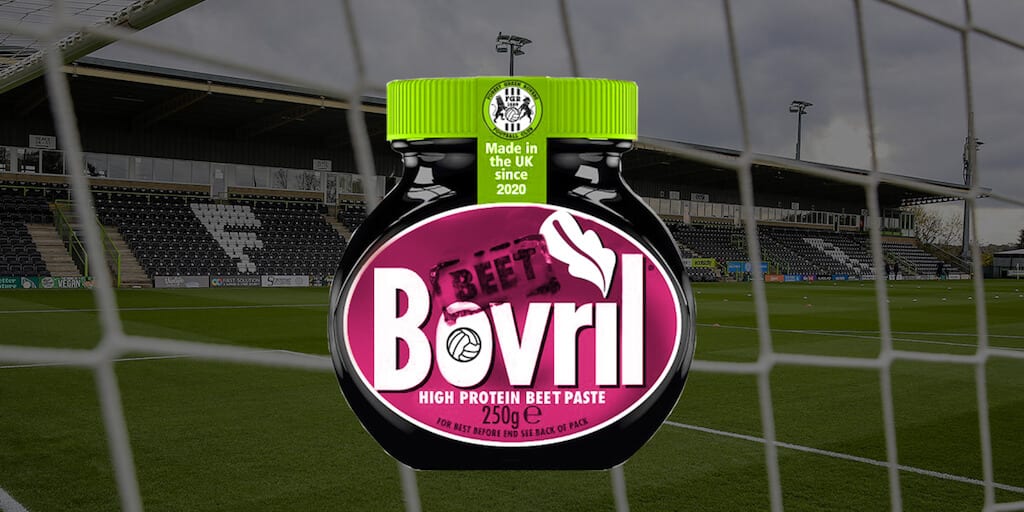 Bovril – a 120-year-old brand – renowned for its thick and salty meat extract paste, has teamed up with the world’s first vegan football club, Forest Green Rovers, to launch the first-ever vegan version of its popular British half-time drink.

The bespoke vegan Bovril drink is similar to a yeast extract, and is made from beets instead of beef. The paste, like the original version, is meant to be added to hot drinks traditionally served at the green stadium.

The high-protein drink will be available exclusively at the football stadium, in Nailsworth, Gloucestershire at the start of the 2021/2022 season.

Since going vegan in 2015, Forest Green Rovers has totally transformed its half time menu, which now features award-winning vegan Q Pies and other delicious plant-based offerings.

The vegan club chairman and Veganuary ambassador, Dale Vince, said: “We’re famously not fans of tradition but – a pie and a mug of Bovril are for many people a football tradition – and while we have great pies without animals in them, we’ve no Bovril alternative.

“That may be about to change, with the advent of plant Bovril.  I think that would be fantastic.”

“There are so many benefits to a plant-based diet – not least athletic performance and as it happens, beetroot is renowned for its enhancing properties. It’s definitely something for our players, another edge to our game.”

“Make no bones about it – plant Bovril is a fab idea.”

‘Times and appetites are changing’

Sophie Allan, brand manager at Bovril, added: “Bovril has long been known as traditional football fare. We’ve been warming the terraces since 1886. But times and appetites are changing, and we would never want to leave any football fans out in the cold.”

“Seeing Forest Green make major moves in the vegan space made us realise that there has never been a better time to explore the prospect of a new, one off formula that simply can’t be beet – ensuring that all fans can get in on the action.”

Share this story to let others know about Bovril’s new vegan beef drink.