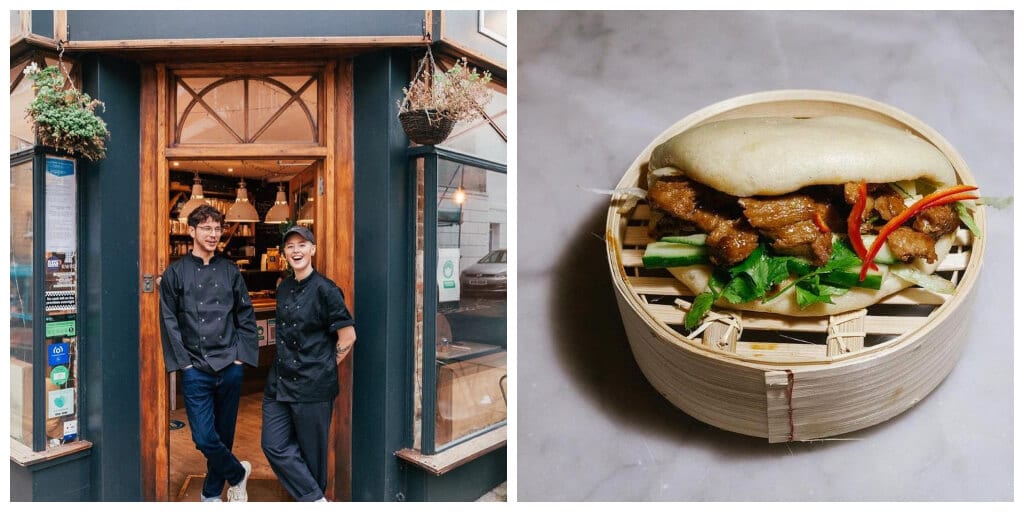 “Whether you’re a meat-eater or a lifelong vegan, we’re confident you’ll have an unforgettable dining experience.”

A new restaurant specializing in Asian-inspired vegan dishes has opened in Brighton.

BangBao is the latest vegan venture in the seaside city, which is already known for its thriving vegan indulgence.

The food business at the iconic North Lanes has been founded by Dominic Sherriff, 26, and Amy Bennett, 21, who between the two of them have over 13 years’ worth of professional cooking experience.

After working as head chef and head pastry chef respectively at a vegetarian restaurant in Brighton, they decided to start their own restaurant, which aligned not only with their plant-based food aesthetics but also focused on sustainability and environmental impact.

The restaurant, which is currently operating as takeaway only via Uber Eats, serves several mouthwatering dishes including the Indonesian Style “Pork Belly” Bao, which features in-house pork made from scratch using tofu and tapioca, and a secret blend of spices to create the ‘same texture, richness, and flavour as a pork belly’ along with caramelized apple puree, crackling crumb, coriander, and gem lettuce

The restaurant’s Choc Chip Cookie Dough made from coconut oil, matcha powder, and cacao nibs is one irresistible treat.

In addition, BangBao serves all takeaways in environmentally friendly packaging made from recycled materials, and the vegetable produce is sourced locally to reduce the foods’ carbon footprint.

Despite the ongoing pandemic, the pair is confident in making the venture successful.

“We want to make sure we do everything in the most sustainable way, educate our customers as much as possible about the mind-blowing and inspiring world of vegan food, and give everyone that walks through our doors an experience that they won’t forget,” the young entrepreneurs write on their website.

“There is a common saying in the world of veganism that ‘taking an animal’s life is not worth the meal that you will forget about in a week’.

“Here at BangBao, no animal lives are ever harmed and you will remember your meal with us next week, and the week after that, …

“Whether you’re a meat-eater or a lifelong vegan, we’re confident you’ll have an unforgettable dining experience.”

Around the same time, a vegan kiosk called Veg Up opened on Brighton Pier serving burgers, wraps, and more.

In July, Oowee Vegan opened its first Brighton location following a phenomenal response to its diner-style vegan burgers in Bristol and London.

Even Really Happy Chicken– a KFC-style vegan fried chicken restaurant opened its doors last year. The restaurant sold out of its seitan-based chicken in just four hours on its first day.