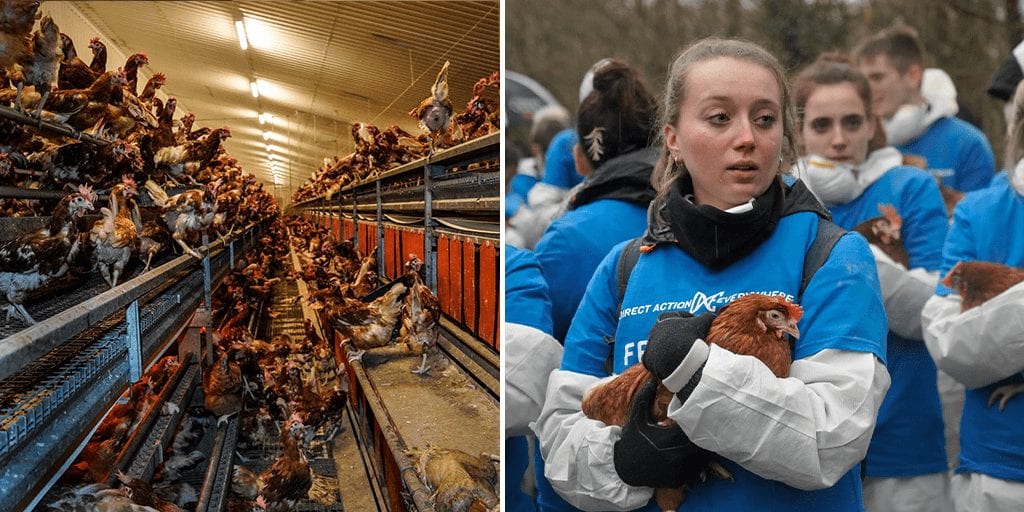 A free-range egg farm has been suspended after an undercover investigation revealed rotting carcasses, diseased birds and appalling living conditions.

After monitoring the farm for nearly six months, a large group of 150 activists from Direct Action Everywhere (DxE) Brighton dressed in hazmat suits entered the Hoads Chicken Farm near Rye at 6am, Monday and captured horrendous images of neglect, abuse and torture.

Our investigators visited Hoads Farm multiple times over 6 months. Many of the hens’ cloaca, were visibly infected, bleeding and swollen from forced overproduction. In the disease-ridden conditions, many piles of dead birds were found in the walkways #freerange #highwelfare pic.twitter.com/hom72A54cI

DxE Frontlines have negotiated the lives of 50 hens from Hoads Farm, the hens are being moved animal sanctuaries where they can live out the rest of their lives free from human exploitation pic.twitter.com/JyvWCU29DD

Some members also chained themselves together at the farm driveway for more than five hours, to stop vehicles plying the premises.

The captured footage showed chicken corpses strewn across the premises; birds bruised, infected, and bleeding; and the machinery drenched with egg liquid.

“Many of the hens’ cloacae, from which their eggs are laid, were visibly infected, bleeding and swollen from forced overproduction.

“In the disease-ridden conditions, many piles of dead birds were found in the walkways among the living hens, and each time that we visited we found the same and new bodies decomposing.

“The dead will have died in pain.

“We have taken action today that some may see as radical, but our actions must match the severity of what takes place behind those walls.”

Suspending the farm for further investigation, a spokeswoman for the organisation said: “We are shocked and appalled by this footage and we understand why people are upset. Any allegations of poor welfare issues on RSPCA Assured certified farms are taken extremely seriously, which is why we have suspended the farm whilst we urgently investigate.”

The farm that supplies eggs to Sainsbury’s, Asda, Morrisons and Tesco is owned by James Potters Yorkshire Farmhouse Eggs.

The farm website states that it upholds values “for animal welfare, high quality standards and sustainability” and sells only “genuine free-range eggs.”

Refuting the charges levied, Hoads Farm said its standards met both EU law and those set by RSPCA Assured and BEIC Lion standard.

A farm spokesman said the RSPCA had been invited to visit and make sure “all necessary” free range standards were being met, and a vet on his recent visit had “identified no issues”.

According to the Metro, the farm spokesperson added that the footage was “in no way reflective of our farms and/or the welfare of our hens” and that “all sites are routinely visited by independent bodies both announced and unannounced to ensure standards are maintained”.

The farm in a statement stated that the activist group were “trespassing in a privately-owned free-range hen house” and their continued presence was “causing significant distress to the hens as well as potentially compromising the biosecurity measures in place”.

Superintendent Howard Hodges of the Sussex police present at the venue said: “Whilst we respect the right of individuals to protest however we have to balance this with the rights of the workers and the farm to go about its normal business.

“We are working with farm and protesters to bring this to a peaceful resolution.”

The activist group protested for nine hours and left after rescuing fifty chickens from the farm.

Share this article to reveal the truth behind the free range egg industry.