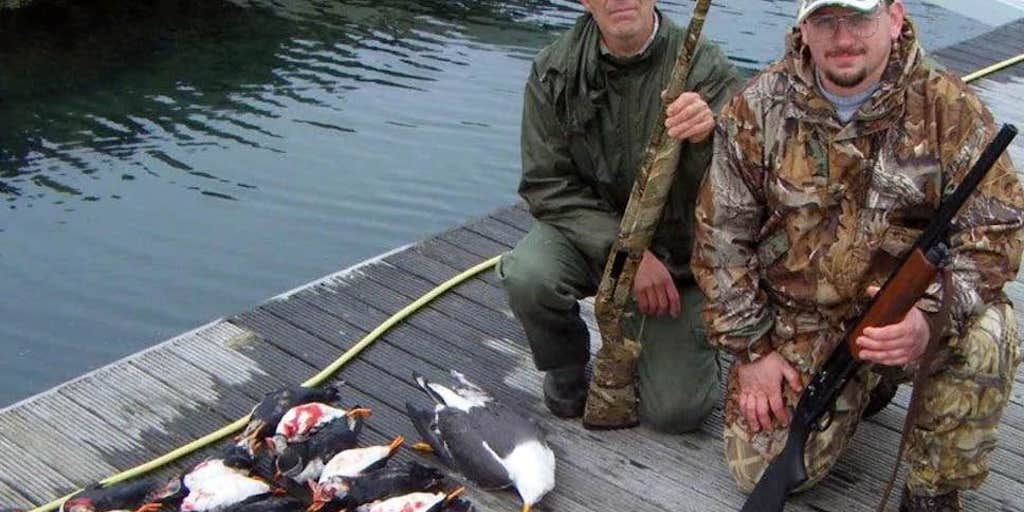 Trophy hunters are being blasted for taking part in twisted puffin shooting trips in which they kill up to 100 of the endangered birds in one go, according to animal rights activists.

Tours offered in Iceland, which cost up to £3,000, allow hunters to shoot huge groups of the birds which are not legally protected in Iceland despite their endangered status.

Disturbing photos show proud hunters holding guns while kneeling beside dead birds lined up on the floor – images which are used by hunting companies to advertise the trips.

Activists say they have evidence that British hunters are taking part in the tours and bringing trophies back to the UK, and are demanding tougher laws preventing the import of their corpses to help stamp out the industry.

Puffin populations are in decline because of human interference and climate change, with numbers in Iceland dropping by 1.5 million in recent years.

The International Union for Conservation of Nature lists the species as ‘vulnerable’ to extinction.

Eduardo Gonçalves of the Campaign to Ban Trophy Hunting said: “The puffin is now in danger of becoming extinct, and uncontrolled hunting has been identified as a leading cause.

“There should be an immediate moratorium imposed before it is too late.

“CITES keeps no data on how many puffins are shot for recreation or traded. It is incredible that such an iconic species has been forgotten by the international community.”

Puffins face threats to their survival across the globe due to humans. Earlier this year hundreds of puffin carcasses washed up on the shores of Alaska’s St. Paul Island due to the effects of climate change.

Scientists concluded the birds died of starvation, and though only 350 dead birds were found between October 2016 and January 2017, they estimated somewhere between 3,150 and 8,500 may have succumbed.

A report warned that the deaths are part of a bigger problem as climate change wreaks havoc on marine ecosystems.

The journal in PLOS ONE was written by a team of scientists from the University of Washington and the Aleut Community of St. Paul Island Ecosystem Conservation Office.

“Collected specimens were severely emaciated, suggesting starvation as the ultimate cause of mortality,” The University of Washington’s Timothy Jones wrote.

“Whether seabirds are resilient to these changes will ultimately govern their long-term viability in an increasingly variable climate.”

Global warming has reduced the amount of sea ice and caused fewer forage fish, crustaceans and other prey animals in the area.

What do you think of the puffin trophy hunters? Share your thoughts in the comments below!