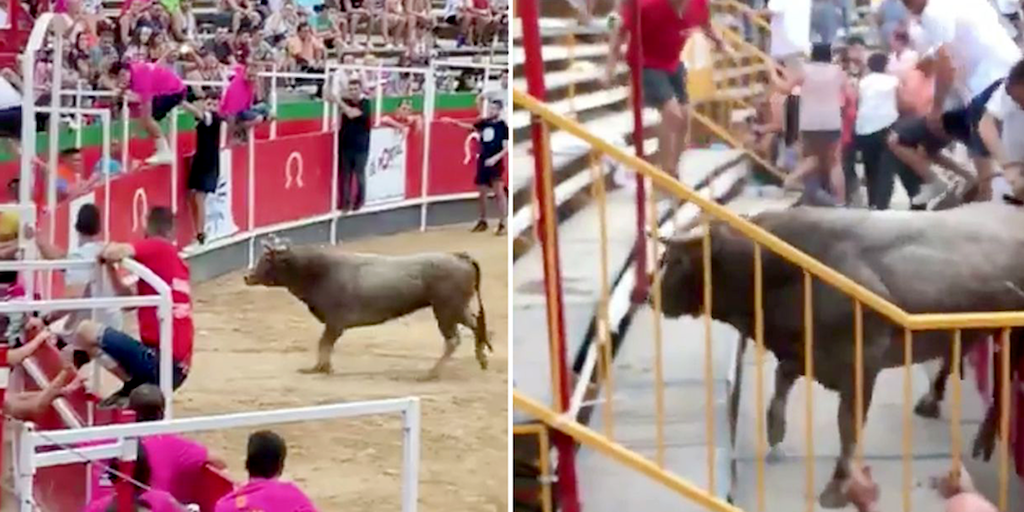 A terrified bull was shot by police after it managed to escape from a Spanish bullfighting ring and began rampaging through a crowd.

Several spectators of the event were injured, one critically, in Vidreres near Girona in north-east Spain after the bull jumped over the barrier and tried to find an escape route.

Local media publication  La Vanguardia reported that 18 spectators were taken to hospital and have since been discharged, with one injured man still in a serious condition.

The upsetting footage shows a distressed bull being tormented by matadors in an arena.

One man is seen taunting the bull while sat on top of some hay stacks, while many spectators are seen climbing in and out of the arena, causing further stress to the animal.

The bull eventually chases one of the men into the audience, jumping the low fence and into the crowd.

Hysteria breaks out as the bull runs through the terrified audience, most of who run in panic, but some attempt to grab the animal’s legs and tail.

Local media reported that police shot the bull on the scene.

“Vidreres Town Hall regrets the incident that happened on Sunday in which a bull has left several people injured. The police have launched an investigation,” Vidreres Town Hall, the festival’s organisers, said in a statement.

“We would like to transmit our solidarity and concern to the casualties, their relatives and friends, and wish them a speedy recovery.”

Animal rights activists vented their fury at the footage, which refreshed calls for bullfighting to be outlawed.

One man was seriously gored by the full. A witness told the Mirror: “I saw what happened, It made my stomach churn.

“I’m amazed he didn’t die at the scene because it looked to me like his head was left hanging from his neck with it turned round towards his back. It was horrible.”

Spanish bullfighting is in rapid decline as public opinion increasingly mounts against the cruel and torturous practice.

Bullfighting involves humans attempting to subdue and kill animals in the name of entertainment.

Data released by Spanish authorities reveals that the sport’s popularity is drastically declining as the public wakes up to its brutality.

The majority of the Spanish population and tourists alike now oppose bullfighting, while in many areas the practice is outlawed.

Catalonia and the Balearic Islands have both passed legislation which effectively prevents bullfighting from taking place.

What can be done to stop the bullfighting industry? Share your thoughts in the comments section below!