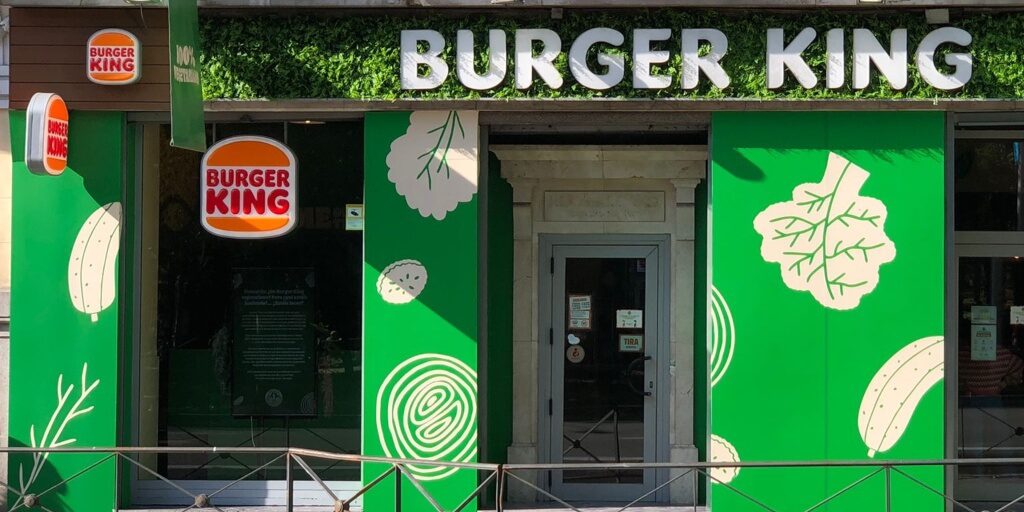 The move is an attempt “to reach both people who base their diet on vegetable products and those who do eat meat but who reduce their consumption.”

The pop-up on popular Paseo el Prado street is rebranded as Vurger King and will exclusively serve vegetarian items for an entire month.

The newest addition is inspired by one of the brand’s best-selling item, Long Chicken and is made up of bread, lettuce, mayonnaise and a chicken substitute made with soy and wheat.  The non-vegan mayonnaise can be omitted for a fully vegan option.

Currently, The Vegetarian Butcher and Burger King are working to get plant-based burgers on the menu in 25 countries and the team has launched plant-based Whoppers and other meatless options in Germany, France, Mexico, China, and, most recently, South Africa.

“We want to reach both people who base their diet on vegetable products and those who do eat meat but who reduce their consumption, ” Borja Hernández de Alba, CEO of Restaurant Brands Iberia Spain and Portugal said in a statement.

The move follows recent research, which shows that around 13% of Spaniards follow a mostly or entirely vegetarian or vegan diet – about 8% are completely vegetarian and about a quarter of these are vegan – with many describing themselves as ‘pescatarians’, who eat only fish occasionally and others following a flexitarian die, one which includes  minimal amount of meat, fish, dairy and eggs.

With a growing demand for greener and more health-conscious options, Burger King has been rapidly adapting its global menus to include plant-based alternatives.

Around the same, the fast-food giant rolled out the The Vegan Royale in the UK, featuring a plant-based chicken patty and vegan mayonnaise. Moreover, Burger King UK is on track to serve a menu that is 50 % plant-based by 2031.

In May, Burger King Germany announced the opening of a 100% veggie popup in Cologne. Shortly afterwards, Burger King France added Veggie King – a vegetarian burger – to its menu.

The fast-food chain has also started offering its veggie burgers in Mexico while Burger King Paraguay teamed up with NotCo last month.

This month, Burger King US announced it will test Impossible Foods nuggets for a limited time in Des Moines, Iowa, Boston and Miami.