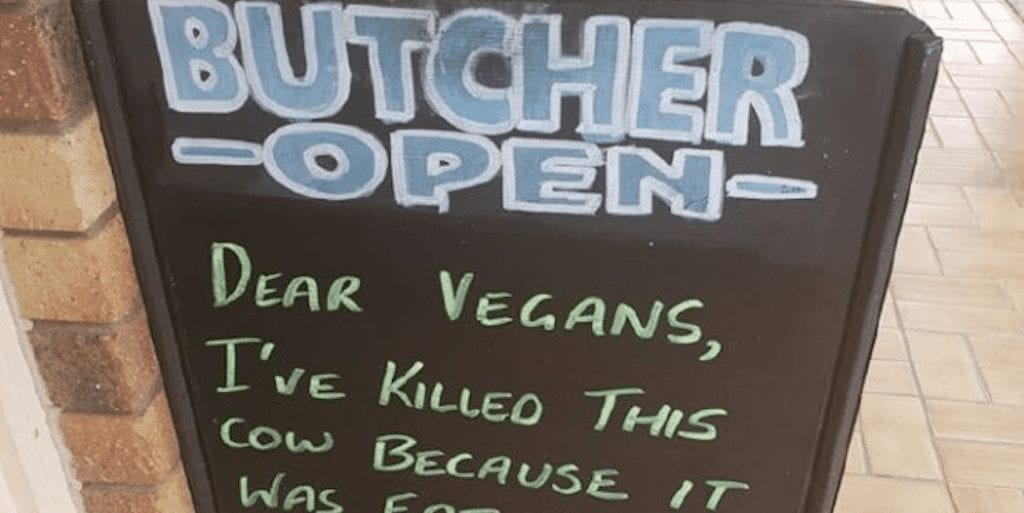 A butcher’s has been spray-painted with the message ‘Meat is murder’ after it taunted vegans about killing a cow on an advertising board.

The pro-vegan slogan sprayed on Bellemere Butcher’s has caused outrage in the small community of Bellmere in Queensland, Australia.

Locals believe the message was a response to an ad outside the butchers which read: “Dear vegans. I’ve killed this cow because it was eating your food. Your welcome!”

The stunt was reportedly carried out in broad daylight on December 28.

He said: “This is not ok. If you want to get your message out there then rent a shop, put up legitimate signage and I’ll defend your right to say it!

“BUT if you destroy somebody else’s property and affect our local businesses through vandalism or graffiti and degrade our streetscape — then that’s NOT OK!”

Josh Long, owner of the butcher, said the stunt most likely helped his sales.

He told the Courier Mail: “We didn’t get a whole lot of negative feedback, most people were supporting us. In the end we got publicity and it didn’t help their cause.

“I understand what they’re saying, but they should have just come talk to us and we could have explained we use RSPCA approved meat.

“People have opinions and they’re entitled to it, but it’s still vandalism whether it’s activism or not.”

Others in Bellmere were highly critical of the message.

One wrote on social media: “In response to this criminal act and ideologically inspired attack on a legitimate business I’m going by make a concerted effort to eat MORE meat, and I’ll take a drive and buy it from this butcher.”

The pro-vegan message on the butcher’s was accompanied by #Veganuary – referring to the charity challenge to ditch animal products in January, which has more than 200,000 participants this year.

What do you think of the message sprayed on the butchers? Tell us in the comments below!