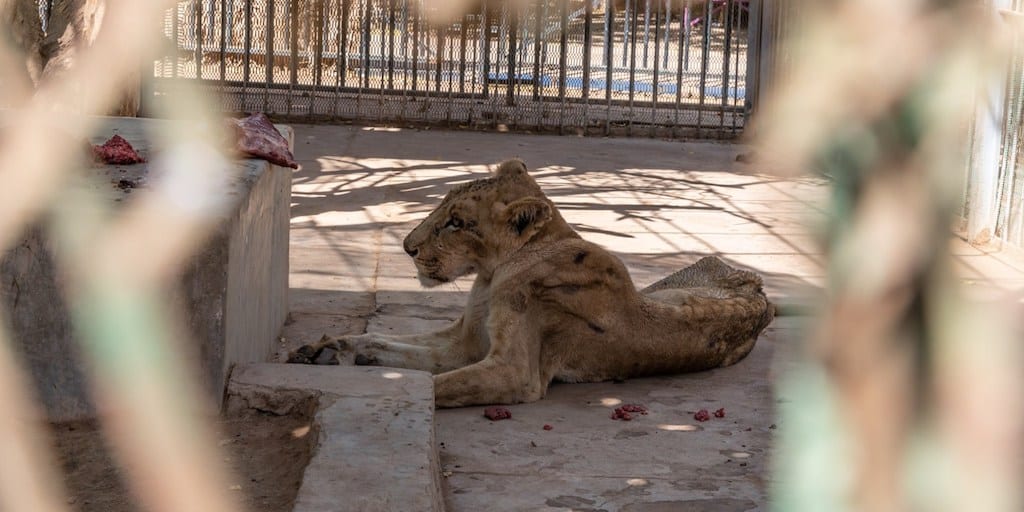 A group of caged lions who were on the brink of death are making a slow recovery after images of their malnourished state went viral and sparked a campaign to save them.

The images of the African lions sparked fury from animal rights activists and lovers around the world.

Welfare campaigners said the lions did not have enough food or sufficient medicine at Al-Qureshi Park in Sudan.

The harrowing images and video footage reveals lions in small rusty cages with their bones clearly showing through their skin. Some animals are too weak to stand.

Today was a positive day at Qurashi Park. We had good meetings with the park administration and the wildlife police. It…

One of the lions has since died, further fuelling the campaign to have the animals rehabilitated.

Park officials say they have not been able to provide food for the lions due to huge hikes in prices for food following a foreign currency shortage.

The lions have also not been provided with the necessary medicine and have lost two-thirds of their body weight.

Park officials said what little food the lions had been given they had to buy with their own money, and some locals have come to offer supplies.

The images were first shared on Facebook by Osman Salih, who wrote: “I was shaken when I saw these lions at the park… their bones are protruding from the skin.” “I urge interested people and institutions to help them.”

Some of the animals have been fed fluids through a tube as they are too ill to consume solids.

Salih explained that the zoo has struggled to attract donations from normal sources such as GoFundMe due to US sanctions on the country.

“Despite all of this, the marathon of recovery, healing and redevelopment…continues,” Salih wrote.

On Wednesday, he shared a photograph of the remaining lioness after volunteers had brought food, saying she was making ‘beautiful progress’.

“Many international organisations are willing to help’ the lions, and some of the lions are making ‘beautiful progress”, the activist added.

Salih met with park officials and made promising progress, with the campaign attracting enough donations to buy antibiotics and an IV drip along with food supplies.

One female was given injections, while Four Paws International sent emergency rescue resources to Sudan.

Salih was later informed that the female, who he was concerned was close to death, was making a dramatic recovery and was on her feet for the first time in weeks.

“To be honest I was worried I would not find her alive this morning but she was at her absolute last breath and I am determined to help her at all costs,” Salih wrote.

“I can feel she is a fighter and if she survived this long without care I pray that with our initial care we can get back on her feet and fit again.”

African lions are classified as ‘vulnerable’ and their numbers have almost halved since 1993 – there are roughly only 20,000 left in the wild.

Share this article to raise awareness for the struggles faced by African lions. What do you think if the activists’ efforts? Share your thoughts in the comments section below!