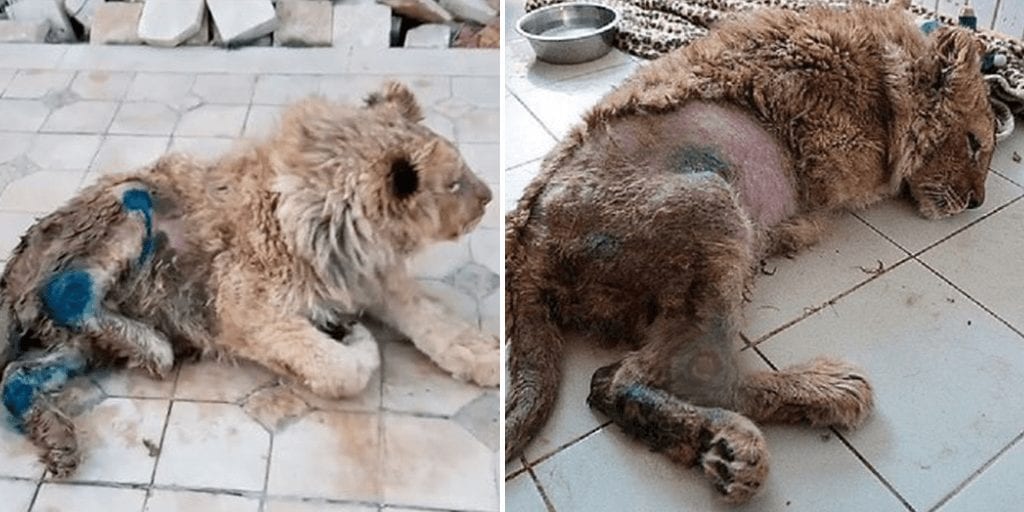 In another case of horrifying animal abuse at the hands of humans, a lion cub’s hind legs were deliberately broken so that tourists could pose and click pictures with the cub without it attacking or running away.

According to reports, cub Simba was just a few weeks old when he was separated from his mother to be trained to attract tourists on Russian beaches.

Last summer, Simba’s captors broke his legs to stop him from running away as he grew older, bigger and stronger.

The Metro reported he was repeatedly ‘tortured and beaten’ and later abandoned in a dirty, cold barn in the Russian region of Dagestan.

Rescuers found him on the brink of death with severe injuries to his spine and legs.

“He was practically not fed, and for some reason frost water was constantly poured over him,” said Yulia Ageeva, who led Simba’s rescue mission.

The cub was flown over to Specialist vet Karen Dallakyan’s clinic, who said: “Evil photographers break bones like this so that wild predators cannot escape and behave calmly for pictures [with tourists].”

The vet added that Simba had suffered “an ocean of pain from humans”.

The cub was treated for pressure sores, intestinal obstruction and atrophied hind legs.

Although the vet performed a surgery, which has helped the cub to walk again, the animal will remain ‘permanently deformed’.

The cub is being rehabilitated by Dr. Dallakyan’s team and is now able to walk with a noticeable limp but looks much healthier with his luscious coat regrown.

According to the vet, his recovery is a ‘miracle’, especially after being treated so cruelly.

The horrific crime has been condemned by many people, including the president of Russia—Vladimir Putin—who has ordered an official probe into the matter and has promised to punish the animal torturer and accomplices.

Share this story to reveal how humans abuse innocent animals.