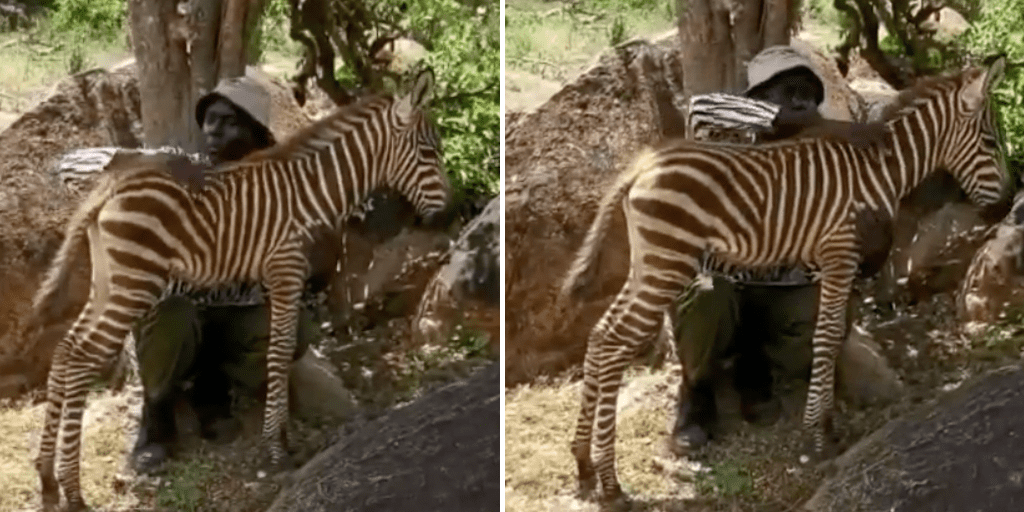 ‘We make the same promise to every orphan we rescue, to help them return to a life in the wild when they’re ready.’

A non- profit organization in Africa- Sheldrick Wildlife Trust has pulled out all the stops to tend to an infant orphaned zebra foal after a herdsman rescued the baby.

Diria- the baby zebra named after the ranch that rescued him- survived a near death experience after a herd of lions attacked the mother and son. While the mother was killed, Diria escaped by sheltering among a nearby herd of goats.

A farmer that witnessed the spectacle fed the zebra foal some goat milk and took care of him before handing him over to Sheldrick Wildlife Trust’s Voi Reintegration Unit.

Since his rescue, Diria has been lovingly looked after and given constant attention, company and feeds just as he would have received from his mother.

According to the conservation, baby zebras need to recognize their mother to survive and imprint on their mother’s stripes at birth.

A Sheldrick Wildlife Trust spokesperson explained: “Plain zebras live in close-knit groups and the bonds between mother and baby are especially strong.

“Baby zebras need to be able to recognise their mother from birth to survive so mothers will often keep their fluffy newborns away from the herd to ensure their calves imprint on them, recognising their unique bar-code coat, call and smell.

“Once the calf can identify its mother, the duo will return to the herd.”

So, in order to properly care for Diria and give him his best chance at survival, the caretakers wear a specific zebra-striped jacket to simulate his mother.

“Every time a Keeper is on Diria duty, he dons this special striped coat. It’s worked like a charm, and the pint-sized zebra now happily trots after whichever Keeper is wearing the designated stripes,” wrote the trust on Instagram.

‘Care at every step of the way’

Diria is growing exceedingly well with all the love, attention and care and is often seen snuggling into his caretakers and trotting behind them.

“Diria is incredibly affectionate with his carers and, perhaps with the exception of his milk, loves nothing more than nuzzling into them as they comfortingly groom him,” said Rob Brandford, executive director of the Sheldrick Wildlife Trust.

“With the help of our supporters, we are proud to be in a position to help this baby boy after such a traumatic start to his life.

The conservation will continue to look after Diria till he is fit and strong enough to survive in the wild.

“We make the same promise to every orphan we rescue, to help them reclaim their birthright and return to a life in the wild when they’re ready. Diria won’t be ready for that for quite some time, and we will care for him every step of the way!,” the trust added.