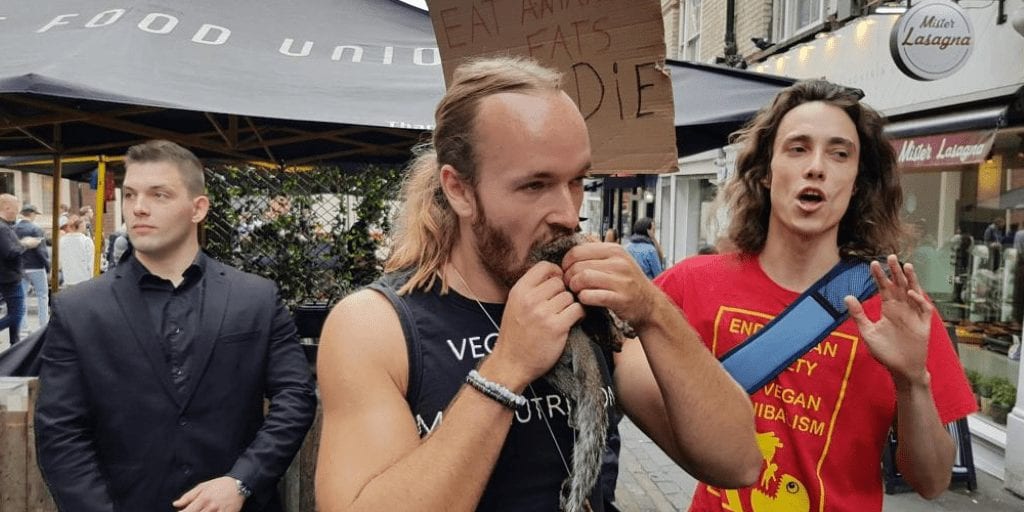 Infamous carnivore YouTuber Sv3rige has continued his anti-vegan tour of the UK by eating a raw squirrel at a vegan market, but the stunt has once again backfired.

The raw meat fanatic targeted Soho Vegan Market on Saturday in a so-called ‘protest’ against veganism.

He was accompanied by two other carnivores in a bizarre attack on a plant-based diet, with the group holding hand-made signs reading ‘eat animal fats, don’t die’.

Sv3rige was also wearing a necklace made from a dead woodcock, and he tucked into the furry dead squirrel with a group watching on in confusion.

Onlookers asked what the point of the stunt was, and Sv3rige explained he’s protesting ‘vegan malnutrition’.

The anti-vegan staged a similar demonstration outside Brighton VegFest just a week earlier, where he ate a raw pig’s head.

Similar to the reaction to his protest in Brighton, which reportedly turned some meat eaters vegan, the public were bemused by the London demonstration.

One onlooker said ‘Why are you doing this? I eat meat but I don’t do this’, while another said ‘you eating raw animals doesn’t prove anything’.

Sv3rige told the Metro: “My message is that veganism is malnutrition and the reason I and other people eat raw meat is to show what humans eat in nature.

“We try to talk to with the vegans and explain to them that there are over 15 nutrients that they can’t get from plants.

“Quite often, we do make them understand and get them to look into it a bit more. Vegans are mostly about morals and ethics, but they don’t know anything about nutrition.

“They believe it’s the best as it’s become a religion for them. They blindly believe we can go from eating meat to just eating plants like a cow, but we can’t as humans.”

The claim that veganism is malnutrition is not backed up by science – research has found that moving towards a plant-based diet is ideal for our health and the health of the planet.

Vegan Society spokeswoman Dominika Piasecka said: “We regret that this individual feels the need to protest against a compassion-driven lifestyle that simply aims to reduce animal suffering and exploitation.

“On the upside, many non-vegans were inevitably disgusted by his actions, which graphically raised awareness about how our food choices harm animals.

“It is perfectly possible to get all the nutrients your body needs as a vegan; the British Dietetic Association shares the message that vegan diets are suitable for people of all ages and life stages.”

Vegans were not concerned by Sv3rige’s protest, and many feel he is doing more good for veganism than harm as meat-eaters are forced to see the brutal reality of meat eating.

What do you think of Sv3rige’s protest? Tell us in the comments section below!