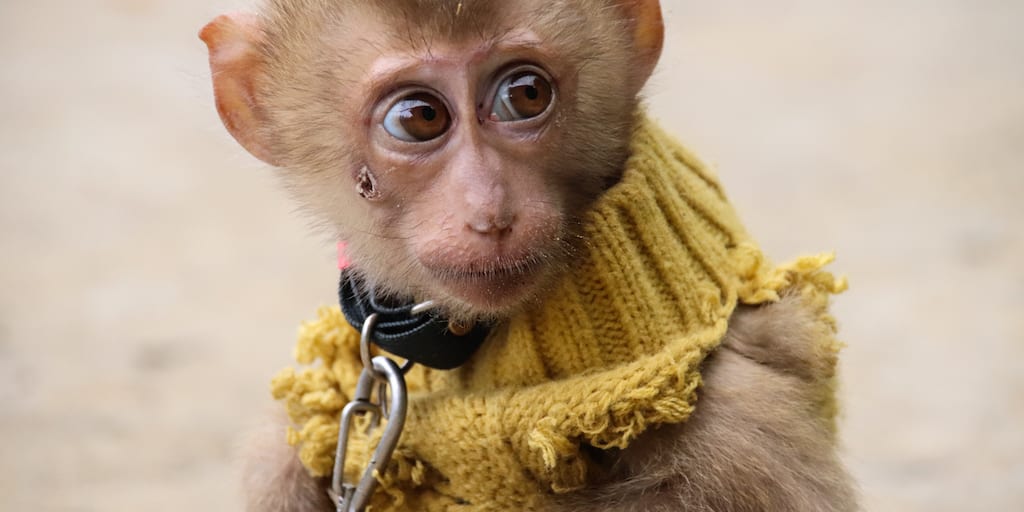 Animal rights activists have released shocking footage of a show in Thailand where monkeys are dressed up and forced to juggle fire in front of tourists.

PETA shared the footage which the group said is filmed at Chang Puak Camp in Ratchaburi.

Activists say the ‘humiliating’ scene in which animals are forced to jump through spiked hoops and pretend to sing would be extremely stressful for the monkeys.

PETA has demanded that travel agents stop selling tickets to the organisation. Many agents have cut ties with SeaWorld due to animal welfare concerns, and PETA wants tourism companies to apply similar policies to Chang Puak Camp.

Activists have accused the park of pulling out monkeys’ teeth to force them into submission.

Shocking video footage shows a monkey wearing a gold dress and makeup who is forced to perform tricks.

Another monkey featured in the performance has a rope around their neck, and is seen visibly distressed and attempting to escape.

Monkeys have been trained to perform bizarre tricks, such as pretending to write, playing the guitar and shaking the hands of tourists.

Jason Baker, vice president of PETA’s international campaigns, said in a statement that parks around the world use ‘violent methods that rely on fear of punishment’ to teach the monkeys to perform.

“Public opinion has changed, and forcing wild animals to perform is no longer the way to draw a crowd, but there’s still much work to do,” he said.

“All travel companies need to stop promoting cruel shows and zoos, and tourists must stop buying tickets to them, opting instead to see animals in their natural habitats – the only place where they belong.

“Monkeys don’t choose to walk on their hind legs, wear clothes, ride bikes, or perform other meaningless and humiliating tricks – they’ve simply learned to fear what will happen if they don’t.”

Share this article to reveal the truth behind the animal tourism industry. What do you think of the monkey performance? Share your thoughts in the comments section below!