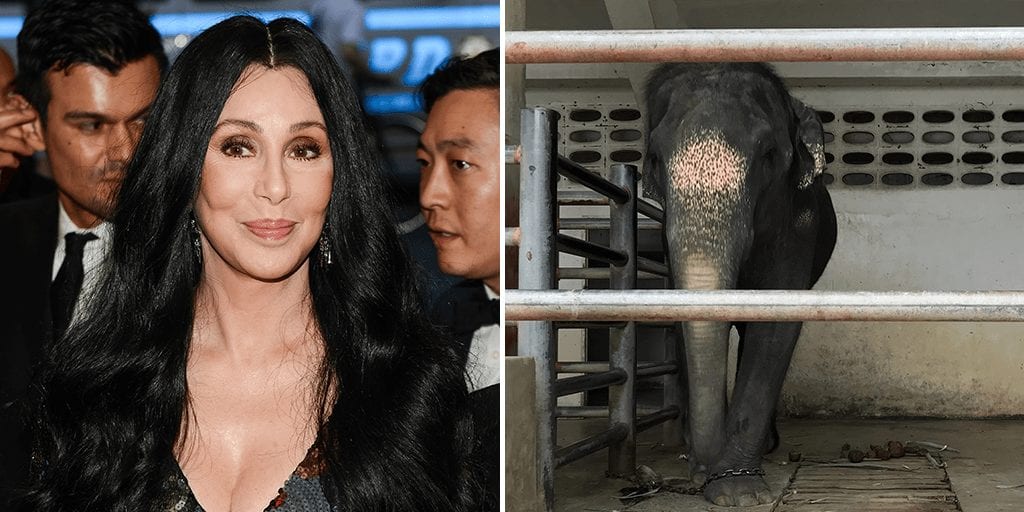 Cher has helped release a 33-year-old elephant from Sri Lanka, who has spent years languishing alone in a Pakistan zoo.

Cher, who co-founded Free the Wild– an animal charity for rescuing mistreated animals from captivity along with businessman Mark Cowne and his wife Gina Nelthorpe-Cowne has been campaigning for Kaavan’s release for the last four years, after hearing about the lonely elephant’s plight.

Confirming the news on Instagram, the group wrote: “After what seems to have been a never-ending struggle we can, at last, tell you that Kaavan the elephant is definitely to be freed.

“Having jumped through every hoop and endless meetings …(we) found a legal means to charge Islamabad Zoo for violations to animal welfare and took the Zoo to court. We won!

“Not only Kaavan, but over 800 other animals that were suffering too are all being released as part of the agreement.”

The Oscar-winning actress and Grammy-winning singer also took to social media to celebrate the group’s victory. She tweeted: “This is one of the greatest moments of my life. Can’t stop [crying] … Kaavan is free. [Crying] down my cheeks, but he’s free and Mark Cowne did it.”

“We were concerned about his mental health; he was in a very bad condition. We really wanted to help him. He had been through a terrible time, locked up for 26 years, chained up for all that time.”

The elephant was a gift from Sri Lanka and first arrived at Murghazar Zoo in Pakistan when he was just one year old.

Over the years, the elephant was kept chained and grossly neglected with no proper veterinary care.

His condition further deteriorated after his only companion Saheli, who arrived from Bangladesh in 1990, died in 2012.

Insider reports suggested that zookeepers had also  been keeping Kaavan hungry and wild boards often broke into his habitat to steal his food.

His heart wrenching pictures of being confined and chained in a tiny enclosure with only a decrepit shed to screen the scorching sun and a dirty pool to play in made Cher rally to have him freed.

Cher’s petition for his freedom was backed by over 200,000 signatures and after 4 years, the Islamabad high court finally ruled that Kaavan should be freed, and relocated to a “suitable sanctuary” within 30 days.

“The pain and suffering of Kaavan must come to an end by relocating him to an appropriate elephant sanctuary, in or outside the country”, ordered the court after calling out the zoo for neglecting the animal’s needs for the past three decades.

In another tweet, Cher thanked the Pakistani government, and added separately: “It’s so emotional for us that I have to sit down.”

I WISH TO THANK THE
PAKISTANI GOVERNMENT❣️

Share the news to appreciate Free the Wild’s efforts in rescuing Kaavan.