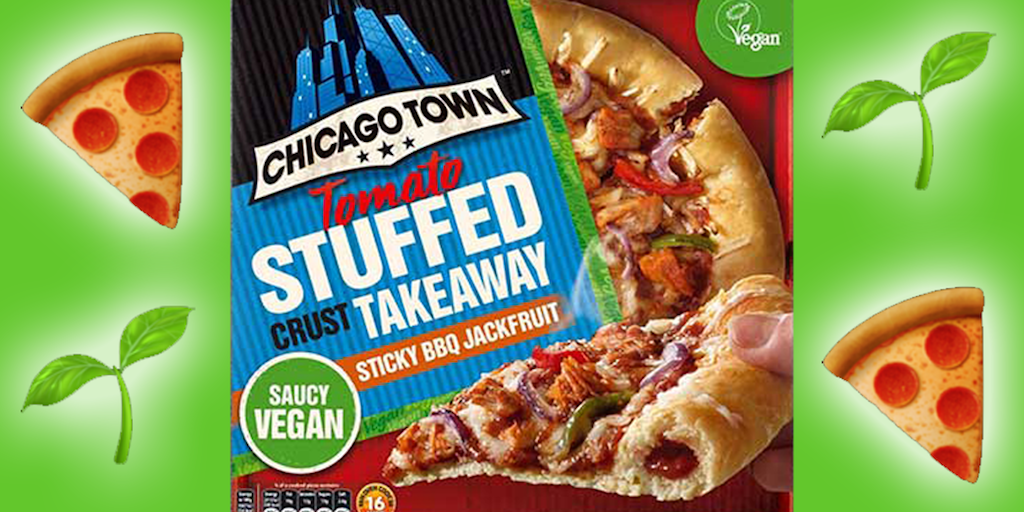 Chicago Town has created its first plant-based frozen pizza with a tomato-stuffed crust.

Vegan pizza ? follow us for all the latest food and drink launches before they land in supermarkets ? Chicago Town is bringing its first vegan pizza to Tesco, Asda and Iceland in January (£3.50) The Sticky BBQ Jackfruit pizza has a tomato stuffed crust

It is made from “peppers, onions and jackfruit in a sticky BBQ sauce with dairy-free ‘mozzarella’, cased in a tomato-stuffed crust,” reports The Grocer.

The pizza will cost £3.50 and will be stocked in Tesco, Asda, and Iceland.

UK supermarkets and food retailers are now offering a range of vegan fare for customers looking for plant-based options.

Hands up if you're loving this weather! ? Follow @nadiashealthkitchen's lead and eat al fresco with our newest vegan pizza!

After Goodfella’s entered the vegan market with its first plant-based pizza in 2018, the brand has launched the Spicy Vegetable Salsa pizza, and the Vegan Stonebaked Falafel in the same category.

Supermarket Sainsbury’s is set to introduce 31 vegan delicacies in the fresh, frozen and canned categories in the month of January.

“With more than seven million vegetarians in Britain and the meteoric rise of the flexitarian lifestyle, Britain has certainly got the taste for meat alternatives at mealtimes,” said Charlotte Gledhill, Product Developer for Sainsbury’s Chilled and Frozen Plant Pioneers, in a statement to Totally Vegan Buzz.

On the other hand, Chicago based Gino’s East became the city’s first pizza chain to add a vegan deep dish and thin crust pizza to its menu.