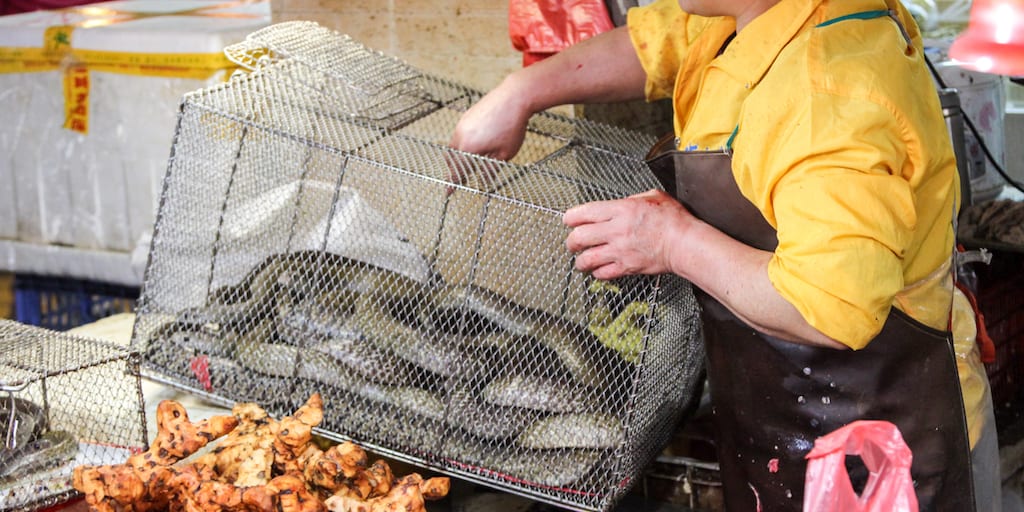 Even after Beijing banned the trade of wild animals on January 26, Chinese police has seized more than 38000 wild animals in nationwide crackdown.

More than 1,367 people have succumbed to the deadly coronavirus or “COVID-19”- its new name, and more than 59,804 people in 28 countries around the world have been infected. Yet, some people can’t resist the urge to eat wild animals.

China has implemented a temporary ban on wildlife trade after experts confirmed the deadly virus infecting humans originated in the Huanan Seafood Wholesales Market in Wuhan and was passed onto humans by eating wild animals, especially bats and snakes.

While China quarantined more than 60 million and various sectors including retail, tourism, aviation and logistics are almost at a standstill, traffickers trading wild exotic species are still going about their business as usual.

In a sizzling crackdown, Chinese police busted 690 offenders and seized over 38,000 trafficked wild animals and 5,174 pounds of wildlife products in a span of 20 days after the ban was implemented on January 26.

A Daily Mail article reported that a number of underground sellers were still running the wildlife trade racket.

The forestry police confiscated carcasses of 56 wild animals, including birds from a 57-year-old wildlife trafficker in the county of Xuwen in Guangdong Province

In another raid, 1,286 live and dead wild animals were recovered from a farmers’ market in Guangdong.

China’s preference for wildlife as food

Contrary to popular opinion, the culture of eating wild animals is not widespread in China and is rampant in only certain pockets of the country.

A 2014 survey that had more than a thousand respondents from five Chinese cities highlighted the disparity in the eating preferences in different parts of the country.

While Guangzhou and Nanning provinces ranked the highest in consuming wildlife as food and as ingredients for traditional medicine, only 5% of the respondents in Beijing admitted to eating wildlife in the previous year

In addition, more than half of the respondents surveyed were against the practice of consuming wild animals.

However, wild animal meat is considered a delicacy among the affluent Chinese population, a probable reason for the illicit trade’s survival.

Experts, scientists and many of the general public have been urging the government to enforce stricter measures against the trade and consumption of these wild species.

“If these markets persist, and human consumption of illegal and unregulated wildlife persists, then the public will continue to face heightened risks from emerging new viruses, potentially more lethal and the source of future pandemic spread,” said   Christian Walzer, executive director of the Wildlife Conservation Society’s health program.

“These are perfect laboratories for creating opportunities for these viruses to emerge.”

Chris Walzer, the executive director of the Wildlife Conservation Society Global Health Program said in a statement: “Preventing future zoonotic outbreaks is not about targeting one species — like pangolins, bats and snakes — but taking strong actions to ban wet markets trading in wildlife and broadly strengthening wildlife laws and regulations.”

Meanwhile, the government is also seriously considering a permanent ban. According to Chinese news agency Xinhua, after convening a meeting on the prevention and control of the deadly coronavirus, Chinese President Xi said: “It is necessary to strengthen market supervision, resolutely ban and severely crack down on illegal wildlife markets and trade, and control major public health risks from the source.”

Share this article to reveal how illicit wildlife trade is a serious threat to humanity.