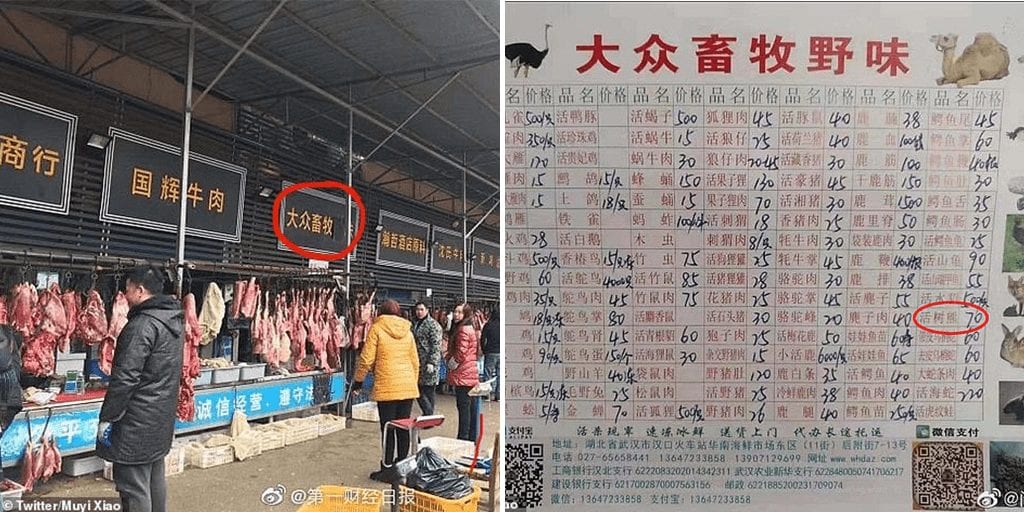 A food market in Wuhan at the centre of the coronavirus outbreak was selling koalas, snakes and wolf pups for human consumption, it has been revealed.

Huanan Seafood Market is in the centre of the city where the virus originated and Chinese officials have exposed the market for selling wild animals.

Coronivirus has now killed more than 80 people and sent many cities in China into lockdown to prevent it from spreading as much as possible. Thousands of people are infected and the virus has spread to many other countries.

And the market which sold live snakes, rats, peacocks, porcupines, koalas, foxes, crocodiles, wolf pups and salamanders has now been closed and is part of an area which has been cordoned off by authorities.

The South China Morning Post reported that Gao Fu, director of the Chinese centre for disease control prevention, said that authorities believe the virus came from ‘wild animals at the seafood market’.

The market sells 112 live animals in total, and many employees at the market were among the first to become infected.

Images were shared on Twitter by Muyi Xiao which showed animal carcasses hanging in the open at the market.

The market was labelled with prices for wild animals, and one image shows the wide range of wild and exotic animals which were being sold.

It shows prices for ‘live tree bears’, while there are also images of camels, peacocks and deer.

The menu says the products are ‘freshly slaughtered, frozen and delivered to your door’.

It is illegal to traffick many wild species in China, but regulations are not strictly enforced in many areas, particularly when animals are commercially farmed.

Images from inside the market were shared by Chinese news outlets, which revealed many living were animals kept inside small cages including beavers and deer.

Authorities are screening passengers leaving China amid fears coronavirus will spread across the world, but the virus shows no symptoms for the first few days and is therefore very difficult to screen.

What does the coronavirus outbreak tell us about the meat industry? Share your thoughts in the comments section below!