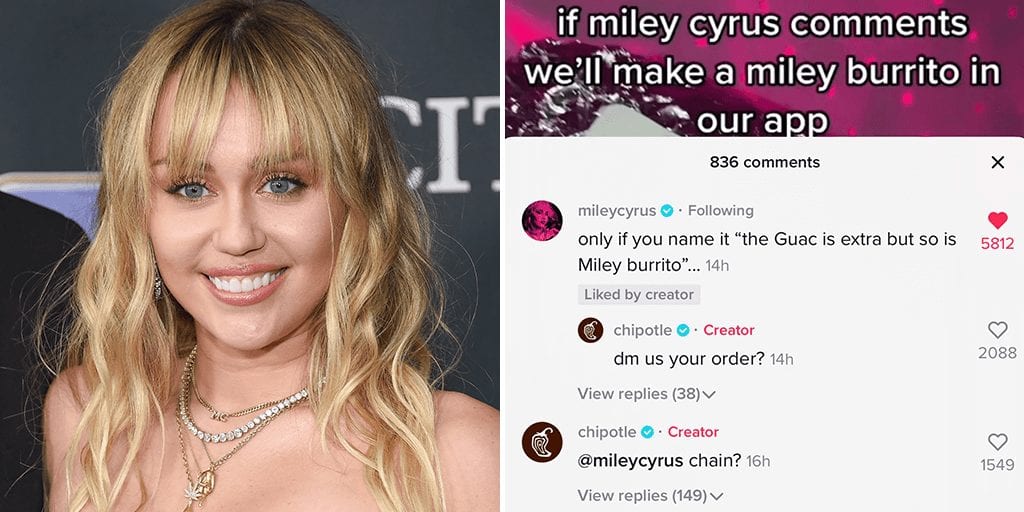 Miley Cyrus has a brand-new meal named after her at Chipotle after dropping a comment on the restaurant’s TikTok account.

It all started with the fast-food restaurant chain hopping on to the new trend in which TikTok users are asking for Cyrus to comment on their videos in what is described as “If Miley Cyrus comments, I’ll do something” challenge.

The 28-year-old responded with a comment: “Only if you name it ‘the guac is extra but so is Miley burrito.’’

The 1030 calorie-packed burrito is priced at $8.75 and will be exclusively available for a limited time on Chipotle’s app or website.

Although Chipotle Cyrus’ burrito is vegetarian, Cyrus recently confessed that she had made a few changes to her diet after a vegan diet left her mentally fatigued.

During an interview on “The Joe Rogan Experience” podcast in September, she said: “I was vegan for a very long time and I’ve had to introduce fish and omegas into my life because my brain wasn’t functioning properly.”

Her comments received a lot of flak and a number a number of health professionals clarified how the idea of fish oil boosting brainpower has no scientific evidence.

In addition, he highlighted that the adults eating fish were exposed to mercury, which reflected in that they not only had subtle EEG brain wave changes, but “observable deficits in neurobehavioral performance measures,” such as poorer results on tests of fine motor speed and dexterity, as well as concentration.

“Some aspects of verbal learning and memory were also disrupted by mercury exposure,” and the effects were more pronounced as the levels increased, his post revelaed.

Share this story to let others know about the new Chipotle Cyrus’ burrito.