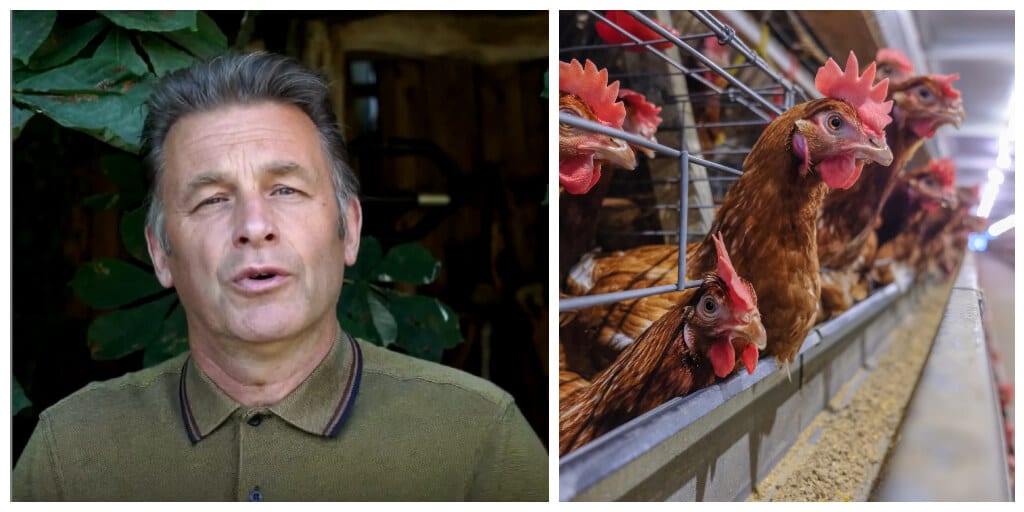 Chris Packham says factory farming ‘is the biggest cause of hidden animal suffering in Britain’.

Conservationist and wildlife campaigner Chris Packham says British supermarkets are ‘selling suffering’ in light of the very worst forms of suffering that chickens on British farms are put through by the meat industry.

The TV personality made the comments as he launched a campaign to push for higher welfare standards for chickens in the UK.

Joining Packham in advocating for the chickens are  UK animal protection groups Humane League UK, Open Cages, Animal Equality UK and the RSPCA – all of which are calling on supermarkets to commit to the Better Chicken Commitment (BCC) – the ‘leading set of standards for broiler welfare driving the food industry towards higher welfare practices’.

“Every year, millions upon millions of chickens are bred to become oversized Franken Chickens, crammed into bleak, overcrowded sheds, and slaughtered at just a few weeks old,” Packham said.

“As a bird lover, I despair at the thought of these gentle, intelligent, and sensitive animals forced to endure such suffering.

“I think this is the biggest cause of hidden animal suffering in Britain.”

The UK is the third-largest overall chicken meat producer in Europe, and while Waitrose and M&S have already signed up to the Better Chicken Commitment, other supermarkets are yet to do so.

“The decisions supermarkets make now, will seal the fate of millions of animals. We must urgently convince the supermarkets that are dragging their heels to change their ways,” Packham further said.

Dr Emma Goodman Milne, a veterinarian commented: “Whatever your views on eating meat, we should all be striving for the best welfare possible for the animals we farm.

“Fast-growing breeds of chicken suit our greed for ever-more productive animals but at a huge welfare cost to the birds, with musculoskeletal problems all too common.”

Apart from animal cruelty, factory farms have been branded as the ‘single most risky human behaviour’ for pandemics.

According to experts at the European Food Safety Agency, ‘animals reared in high-stress environments such as factory farms are more likely to contract viral infections’.

This ties in with other research which states that diseases spread like wildfire in crowded environments.

In a poll commissioned by the charity, nearly 85% of the 2000 Brits surveyed wanted an ‘urgent’ ban on factory farming amid pandemic fears.

The petition has so far garnered 35,768 signatures. You too can sign it here.