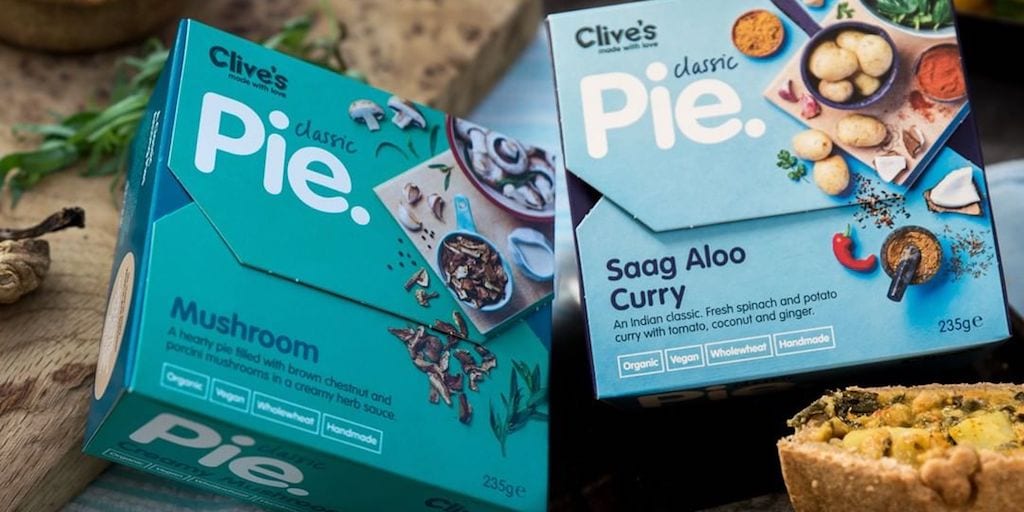 Clive’s has ditched all animal products from its entire bakery range to cater to growing demands of customers ‘wanting easy, organic, vegan options’.

Beginning this month Clive’s Pies, a former vegetarian pie maker famous for its pies, tarts, and gluten-free options, revealed that it has ‘gone vegan for good.’

Making changes to its one last recipe, the Devon based bakery has made its entire range, which consists of sixteen products including the Creamy Mushroom, Arabian Chickpea and Saag Aloo pies, Tomato & Olive and Lentil & Kale tarts as well as their classic vegan nut roast, 100% plant-based.

Clive’s owner Sally Carson said in a statement: “This is a really exciting time for us. We’d been wanting to make the change for a while, and now that we’ve done it – it feels amazing.

“I went vegan myself over three years ago and it just felt like the next logical step for the business. We’ll still be small-batch baking using organic, sustainably sourced ingredients, but now customers can tuck in knowing everything is purely plants.”

Clive’s pies are considered “the favourite pie choice for most independent health food shops”  in the UK. Last November, the hugely popular pie-maker finalized a deal with Morrison’s to supply vegan pies to all of the supermarket’s stores, and its products are extremely sought after in Waitrose, Holland & Barrett, Ocado and Abel & Co with all suppliers seeing a “huge spike in the number of customers wanting easy, organic, vegan options.”

The company also revealed that come June it would be relocating to new larger premises in Dartmouth in order to cater to the fastest growing markets in the food industry. According to data, the number of people identifying as vegan has increased by 350% in the last 10 years.

Clive’s director Esther Pearson, who is also vegan, said: “We’ve been hard at work updating our recipes, and refreshing our packaging to re-launch our now totally plant-based range.

“As always, we’ve done everything with care and consideration for the planet to give people all of the taste and none of the waste.

“We can’t wait to get into the new bakery in June and continue to do what we do best – baking delicious pies!”

Share this news to let others know of the all new vegan range from Clive’s Pies.