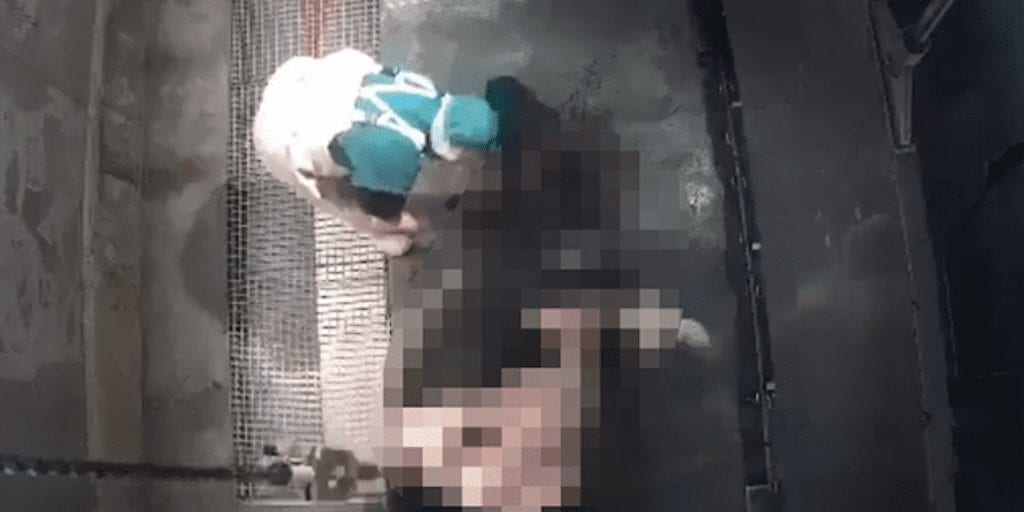 Horrific footage of conscious cows having their legs cut off has been released by animal rights activists.

Non-profit organisation Equalia released footage from a slaughterhouse in Spain.

The scarcely believable video, which was uploaded to YouTube this week, shows cows, lambs and sheep being beaten as the group exposes serious breaches of animal rights laws.

Injured cows are seen flailing around hanging from hooks clearly in agony, in blood-stained rooms.

One cow is lying conscious on the floor and a worker bends down and slits its throat.

Warning: This video contains extremely graphic content which some readers may find distressing.

Equalia said this is the second breach of this nature in the last five months, as the group demands lawmakers introduce legislation requiring video surveillance of slaughterhouses.

The distressing video uploaded to YouTube carries a warning of graphic content. Animals can be seen to be moving while hung from the ceiling on hooks as workers hack off their limbs.

Equalia has launched a petition calling for all slaughterhouses to have CCTV installed which can be signed here.

Activists have made successful inroads to animal for animal rights by releasing footage of this kind in the past.

Slaughterhouse footage shared far and wide on social media exposes the reality of the meat and dairy industry and reaches millions of people who would be otherwise unaware of the brutality involved.

And countless vegans report documentaries such as Dominion and Cowspiracy as the key moment which tipped them into a vegan lifestyle.

In January, harrowing undercover footage of slaughterhouse workers mutilating and killing goats convinced the Royal online shop to remove a mohair teddy bear from the site.

What do you think of the shocking footage? Share this article to expose the brutal reality of the meat industry.