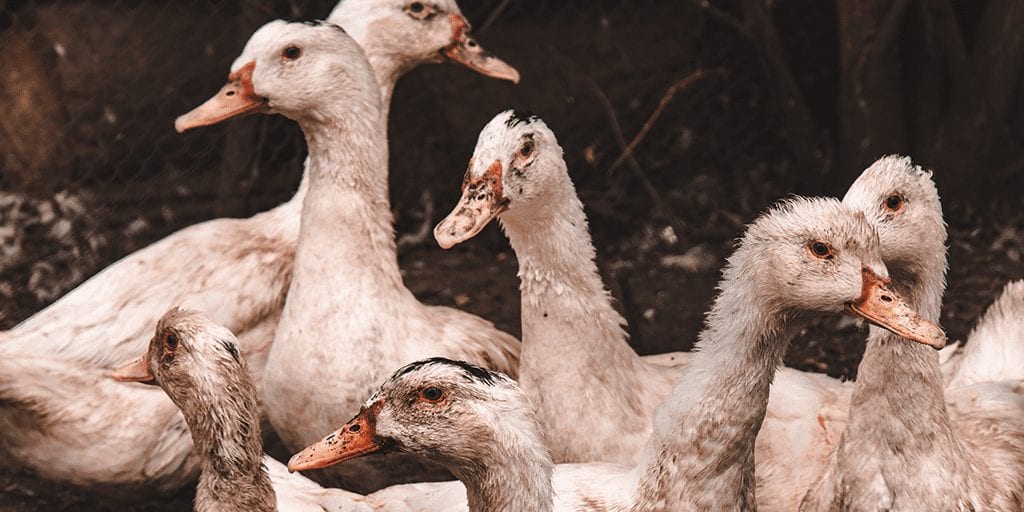 Animal rights activists have exposed a farm which used to supply Canada Goose for abusing geese and leaving them in feces-covered crates for up to 24 hours without food or water.

A shocking investigation by PETA reveals workers grabbed visibly terrified geese by the neck and shoved them in filthy cages.

The harrowing footage also shows geese being crushed and suffocated – all to make down coats and other products.

The birds are left tightly packed together in filthy conditions for hours on end on highway trips before being brutally slaughtered.

Canada Goose formerly used the supplier, but told PETA it has since cut ties.

Canada Goose and the supplier had both stressed they use ethical methods to create down products, but PETA has slammed the industry as a whole.

“Regardless of which feathers came from where, there’s absolutely no such thing as ethical down, despite Canada Goose’s claims—birds used by the industry are all slaughtered in violent ways,” the animal rights group said in a statement.

In the footage, workers herd geese into a pen and the birds then trample over each other in panic. The animals become so distressed that many are crushed in the chaos, and at least one dies before a worker throws them over a fence.

Employees at the farm then grab multiple birds at once by the throat and shove them into small crates. Workers are seen standing on geese and animals are heard flapping in the crates in attempts to escape.

A vet who watched the video told PETA: “Being confined to these small crates for prolonged periods would cause painful muscle cramping, unnecessary stress, and predispose anxious birds to injury.”

PETA explained that the geese are sent on a six hour journey in often cold temperatures before watching others being hung upside down by their feet and having their throats slit.

An investigator for PETA reported seeing that ‘some birds continued flapping their wings and moving their heads as they bled out’.

A vet added that the birds ‘are showing signs of consciousness and sensibility’ in the video and would have been awake when they choked, suffocated, or died of blood loss or shock.

The animal expert added that this would have been ‘an extremely painful and anxiety provoking condition’.

Share this article to reveal the reality behind the down industry. What do you think of the investigation? Share your thoughts in the comments section below.