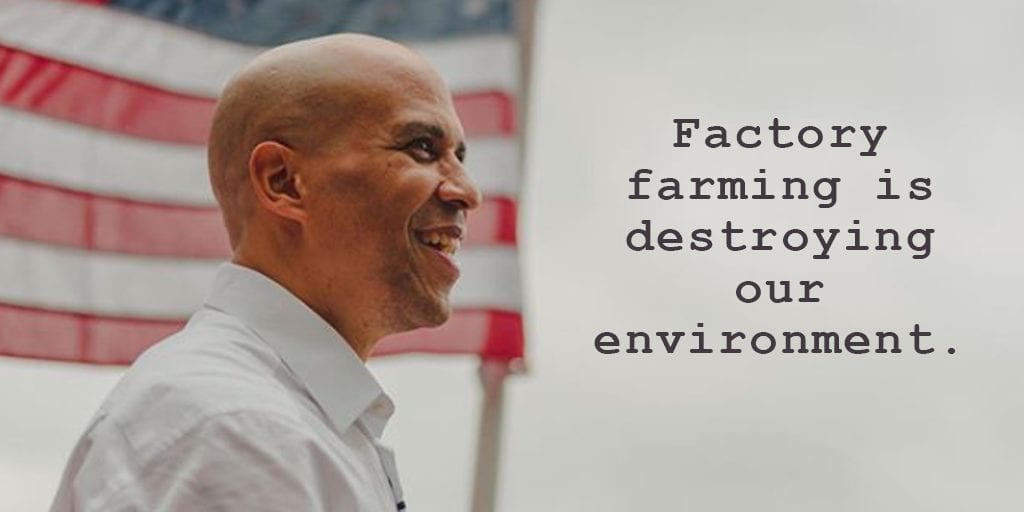 Cory Booker spoke up about his veganism in the Democratic Presidential Debate in which he labelled Donald Trump the ‘unhealthiest candidate’.

Booker was asked by moderator Jorge Ramos if he thought everyone should follow his plant-based diet, to which the candidate replied ‘no’.

But he did go on to slam the farming industry for destroying the planet.

“One of the reasons that I have a bill to put a moratorium on this kind of corporate consolidation is because this factory farming is destroying and hurting our environment, and you see independent family farmers being pushed out of business because of the kind of incentives we are giving that don’t line up with our values,” he said. “That’s what I’m calling for.”

Candidates were also asked about their health, particularly due to Elizabeth Warren, Joe Biden, and Bernie Sanders all being older than 70, and Booker again brought veganism to the stage.

“I feel qualified to say this as the vegan on the stage,” Booker said.

“Going back to the fact that … we asked three people about their health. When looking at this stage, we know that the most unhealthy person running for the presidency in 2020 is Donald Trump.”

Booker again brought up veganism when the debate in his closing statement, when he discussed difficulty finding a restaurant with Texas Senator Ted Cruz.

“I’m a vegan and he’s a meat-eating Texan,” Booker joked.

The presidential candidate has consistently spoken out against factory farming industries.

Earlier this year he gave a passionate speech about factory farms and public health in an interview on CNN.

In the live interview Booker is asked if he would have any policies about healthy eating and climate change.

“I hear about this all the time – ‘Booker wants to take away your hamburger’, oh my gosh” the New Jersey senator said.

“That is the kind of lies and fear mongering that they spread out there.

“I am a vegan, I take my diet very seriously. We live in a society right now… where the farming practices are becoming so perverse.”

What difference could a vegan president make for animal rights? Share your thoughts in the comments section below!