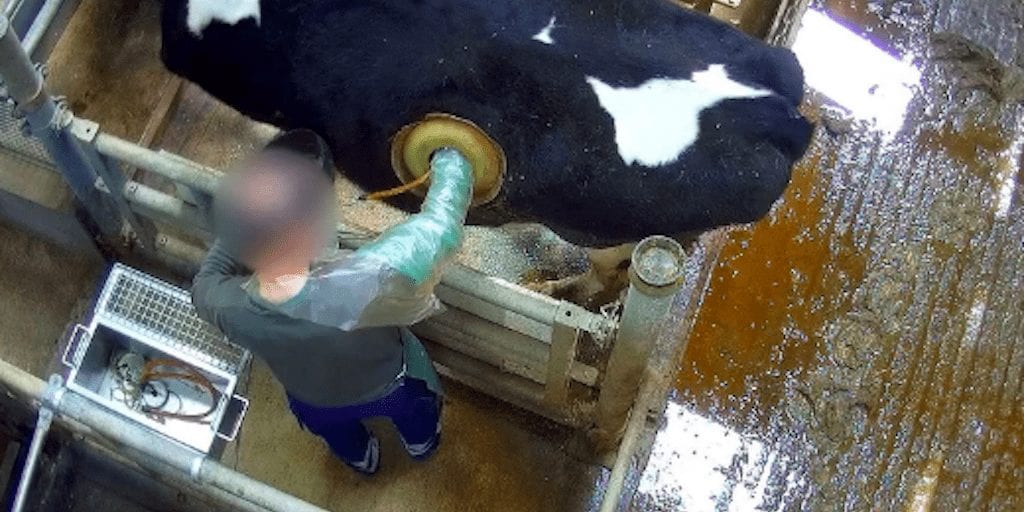 Cows stomachs are fitted with windows by researchers. Image: L214

Shocking footage has exposed a horrific farming practice in which cows’ stomachs are punctured and fitted with a ‘window’ at Europe’s largest research facility.

Animal rights groups released the shocking imagery which shows a man putting his whole arm inside a cow’s stomach. The practice is used to help observe which kind of pasture makes the animals produce more milk and ultimately ensures a farmer will earn more money.

The whole is cut in a surgical procedure called ‘rumen fistula’ which has been used since the 1920s. It allows researchers to observe the inside of an animal’s digestive system.

Scientists and vets claim it can be beneficial for animals if the procedure is carried out without complications, but animal rights have slammed the practice.

Animal welfare group L214 have filed complaints on the back of images released from France.

L214 spokesperson Barbara Boyer said: “We obtained the images after a whistleblower who works there contacted us to alert us to the conditions there.

“We have filed a complaint with the authorities.”

A report in The Sun claimed clips were filmed in the north-western French department of Sarthe, at the Sourches facility owned by the Sanders company, a subsidy of French agro-industrial corporation, Avril Group.

The video was condemned by French TV presenter Nagui Fam, who said: “There are also chickens at the centre that are so fat that they cannot even walk anymore, as well as very sick pigs, calves and rabbits that are trapped in tiny cages.

“For Sanders, these cows are just milk-producing machines that need to have their settings optimised.”

“Other experiments are carried out on isolated calves in small enclosures.

“The pigs only have cold metal as their environment. The rabbits are prisoners in their small cages and they will know only these cages their whole lives. They will never get out.”

The centre has since explained that six cows are fitted with the windows, and they are used to research a way to reduce the need for antibiotics in the farming industry.

Avril spokesperson Tom Doron said they come with ‘rigorous veterinary monitoring and are considered painless for the animal’.

What do you think of this procedure? Share your thoughts in the comments below!