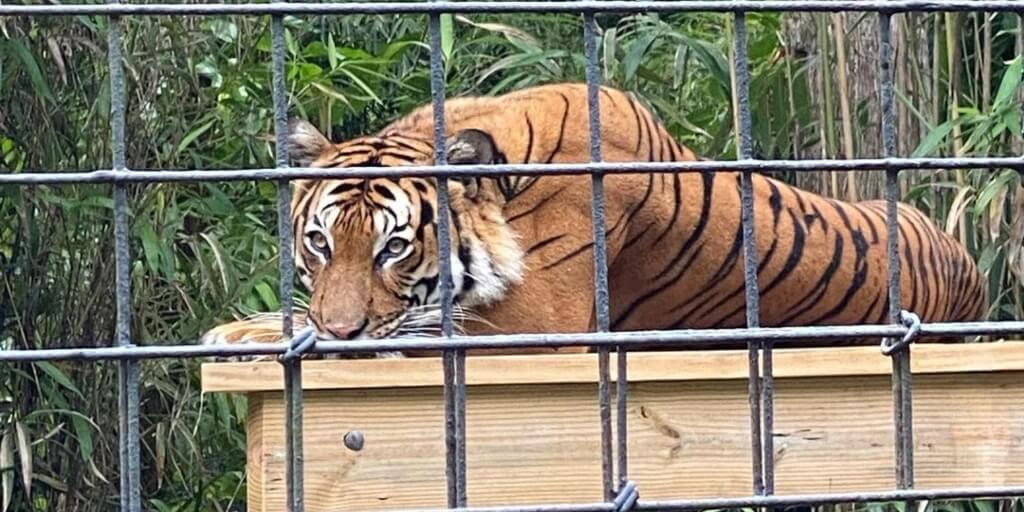 Eight-year-old Malayan tiger named Eko was fatally shot after he bit an unauthorized man that had put his arm into the animal’s enclosure.

Florida police have shot and killed a critically endangered tiger at the Naples Zoo after it bit a cleaning worker.

River Rosenquist, 26, who worked as a cleaner for a company contracted by the zoo  to clean restrooms and the gift shop was attacked after he put his arm into the animal’s enclosure.

According to zoo authorities, Rosenquist had entered an unauthorized area of the zoo at the tiger enclosure after the zoo closed on Wednesday. He was attacked when he was apparently trying to pet or feed the tiger.

Deputies who arrived at the scene found the worker’s arm in the tiger’s mouth.

The Collier County Sheriff’s Office said: “The first deputy on scene kicked the enclosure and tried to get the tiger to release the man’s arm from its mouth.”

When that didn’t work, the deputy was “forced to shoot the animal” to save the man’s life.

The man was seriously injured and was transported to an area hospital.

The zoo spokesperson later confirmed that the tiger, named Eko, was killed.

Naples Zoo is nationally accredited and includes rare animals in a tropical setting such as lions, giraffes, monkeys, pythons, and bears. Eight-year-old Eko was the only tiger at the zoo.

Malayan tigers are a critically endangered species. There are less than 200 mature animals living in the wild, according to the IUCN Red List of Threatened Species.

They are native to Malaysia and at risk because of poaching,  habitat loss,  depletion of their prey, and conflict with human beings, the zoo said in a press release after Eko was relocated to Naples Zoo from the Woodland Park Zoo in Seattle in 2020.

News of the tiger’s death sparked outrage online with many users blaming the man for trespassing a restricted area.

“So the man enters a restricted area, sticks his hand in to feed the tiger. And they kill this endangered animal??” Peter Daou, a Democratic political strategist, tweeted.

“If we’re going to keep animals in zoos, the animals’ lives should be prioritized over people who do stupid s**t like stick their arm into a tiger enclosure,” Ari Cohn, the Free Speech Counsel for TechFreedom, said.

“Why is it always the animals fault?? He climbed in and the animal had to die??? Why??? someone else commented.

“The tiger was just reacting on instinct – should not have been put down for this – the man was at fault,” one more user wrote.