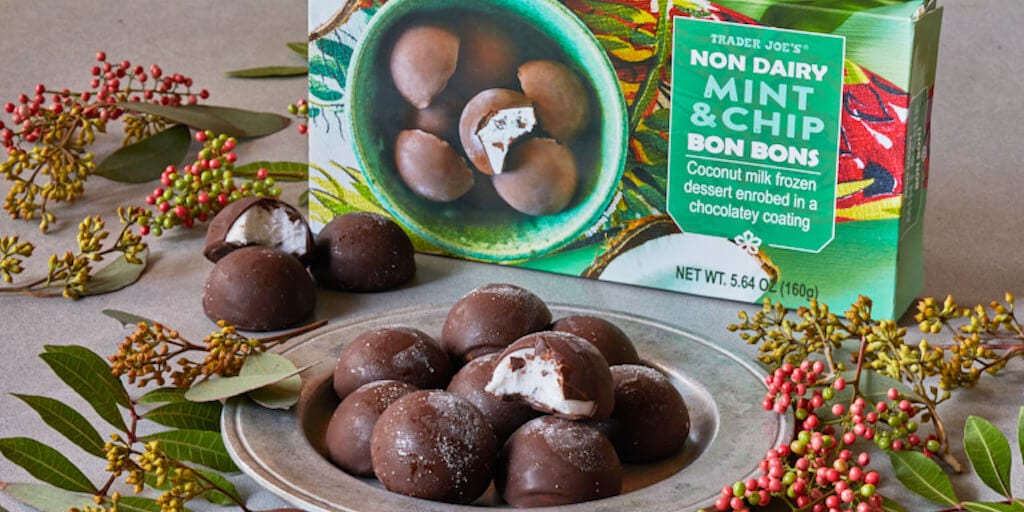 The new seasonal frozen dessert is coconut based and is flavoured with mint.

The new seasonal dairy-free ice cream is made from sweetened coconut cream laced with refreshing mint and studded with crunchy chocolate chips.

The frozen dessert is enrobed with a coating made from coconut oil, cocoa powder, and cocoa butter.

Describing the new dessert, the grocery chain said: “When it comes to ice cream flavor combos, mint and chocolate go together like chestnuts and an open fire.

“The only issue is… it’s not always accessible to those who don’t eat dairy.

“We wanted to pay tribute to this dynamic duo of the dessert world, while making sure that our dairy free customers would have a chance to try it, so we put a supplier who specializes in coconut-based desserts to the task.

The bon bons are sold as a pack of eight for $4.29 per box during the holiday season and are stocked in the store’s freezer case.

With the plant-based trend on the rise, Trader Joe’s has been upping its vegan game and keeps adding more items to increase its vegan repertoire.

The vegan dessert market, currently valued at 2.68 billion, is poised for growth since vegan desserts are no longer considered niche and are rapidly overcoming negative perceptions pertaining to taste and texture.

Grand View Research reports that the global vegan dessert market is expected to grow at a compound annual growth rate (CAGR) of 10.1% for the next seven years.

It attributes increasing demand for dairy alternatives as one of the key driving factors in the vegan dessert industry, which is driven by the fact that more than 75% of the population is lactose intolerant.

This growing demand has created a considerable market for vegan ice cream. A joint report from the Good Food Institute and the Plant Based Foods Association, showed the market reached $304 million in sales in 2018, up 26.5% from 2017.

Share this story to let others know about the new vegan ice cream at Trader Joe’s.