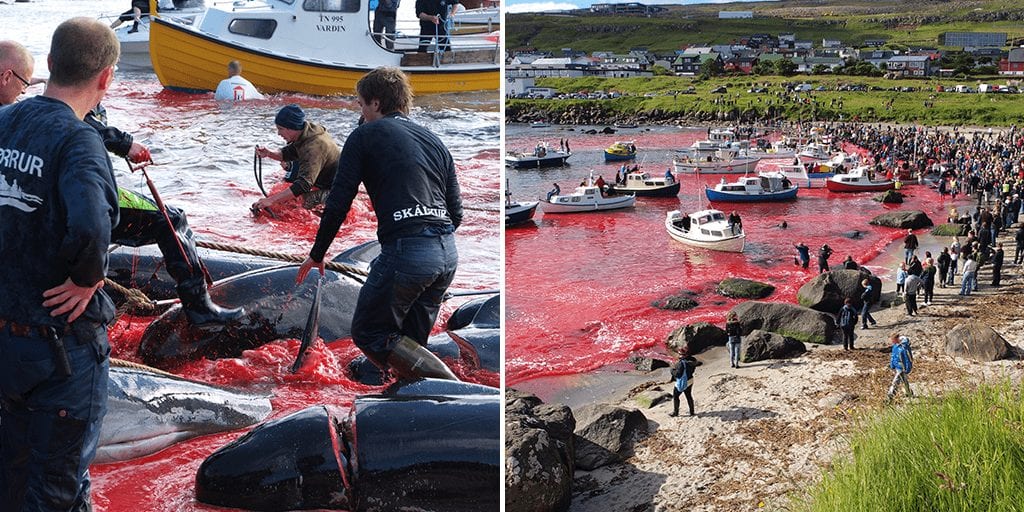 This year the Faroe Islands’ whaling tradition has begun with the killing of some 300 mammals by approximately 70 hunters despite the coronavirus threat.

Over 250 whales have been mercilessly butchered for their meat in a gory annual ritual, which went ahead despite the Covid-19 pandemic.

The innocent whales have been slaughtered as part of the annual ‘Grindadràp’ ritual that has been going on for 1,000 years.

The controversial tradition takes place after the first hunt of the year and all participating hunters have to obtain a license to take part in the event.

As part of the ritual, fishermen gather in Hvalba, a village in the Faroe Islands -a group of islands in the North Atlantic between Norway and Iceland.

The hunt sees vessels herd migratory whales and dolphins swimming past the shores of the Danish territory in a bay.

The fishermen then wade in up to their midriffs and hack them with knives, turning the sea bloody red.

According to Sea Shepherd campaigners, a non-profit marine conservation, the “barbaric practice” has already slaughtered 35 dolphins along with the 252 pilot whales this week.

An estimated 100,000 pilot whales swim near the Faroe Islands each year.

“252 long-finned pilot whales and 35 Atlantic white-sided dolphins were killed in Hvalba last night after the huge pod was found off Sandvik,” a spokesperson for Sea Shepherd told The Daily Star.

Shocking images released from the event show fishermen wading around the dead carcasses as the whales are hauled to the shore.

The meat from the hunt is first distributed among the hunt participants and the surplus is then given away to people residing in the villages on Suðuroy.

Whale meat is a dietary staple on the island. Villagers relish the meat boiled or served as steak.

The century old tradition has been going on despite numerous animal rights groups condemning the act.

Non-profit group ORCA posted on Twitter: “To the beautiful family of pilot whales that were brutally murdered in the Danish #FaroeIslands, we are so deeply sorry.

To the beautiful family of pilot whales that were brutally murdered in the Danish #FaroeIslands, we are so deeply sorry… We will keep fighting to end this insane blood sport. RIP beautiful family…

The Blue Planet Society condemning the blood sport said the cetaceans were “brutally and cruelly slaughtered” despite the fact that the Faroe Islands are part of the Kingdom of Denmark (an EU country) in which both pilot whales and white-sided dolphins are considered protected species.