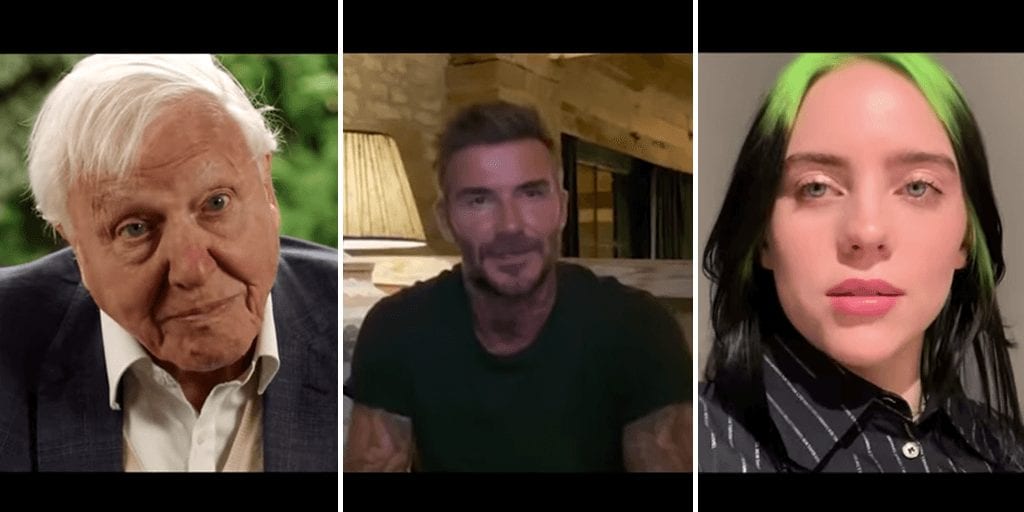 ‘David Attenborough: A life on our planet’ documentary is now streaming on Netflix!

A host of stars including vegan singer Billie Eilish, David Beckham, Dame Judi Dench and Maisie Williams, among others got on a video call to ask Sir David Attenborough some pertinent questions about climate change and the natural word ahead of the veteran naturalist’s new documentary release yesterday.

Singer Billie Eilish, 18, asked the legendary broadcaster: “How do you cope with your personal feelings about all the animals that are losing their lives and/or going extinct?

‘How do you actually deal with that as a human being? I don’t know. I don’t understand.”

He recalled his first experience as he dived into the Great Barrier Reef – stating it was like a “world of extraordinary beauty, complexity and wonder” featuring “wonderfully-coloured fish, and lots of creatures you don’t even know exist(ed).”

However, he added that sadly it was ‘like a cemetery,’ when he returned to the same place at a later stage in life.

“It was stark white. It had died. It had been killed by the rise in temperature that we, as humans, have created,” he said.

“That was a terrible sight and a terrible vision of what we’re doing to the natural world, not only in the sea, but on the land and in the air.”

‘Look after the natural world’

Former footballer, David Beckham, who recently told his fans that he had ditched meat and was sampling plant-based dishes, asked: “You have done so much to open all our eyes to the issues facing our planet.

“Your programmes make us care about the natural world, and what we need to do to protect it.

“If you had one message for our children about the future of our world, what would it be?”

The 94-year-old historian responded: “To look after the wild world of which we are a part.

“To care for the animals you see. Don’t waste things – don’t waste food or electricity.

“Look after the natural world – it is the most precious thing we have and we are a part of it.”

‘The time has come’

Attenborough’s new Netflix show- David Attenborough: A Life On Our Planet spotlights the broadcaster’s more than 60-year career as a naturalist, as well as maps the devastating changes that our eco-system has endured over the last 50 years. The film importantly also delves into the biggest issue of modern times – saving the natural world.

Stressing on the need to ‘work together’ to save the planet, Sir Attenborough in his interview said: “The time has come now when we can’t just have our own selfish interests, when we have to think of other people who are dependent upon what we do.