David Attenborough on Greta’s climate strikes: “Politicians have to sit up and take notice” – Totally Vegan Buzz
Skip to content

David Attenborough on Greta’s climate strikes: “Politicians have to sit up and take notice” 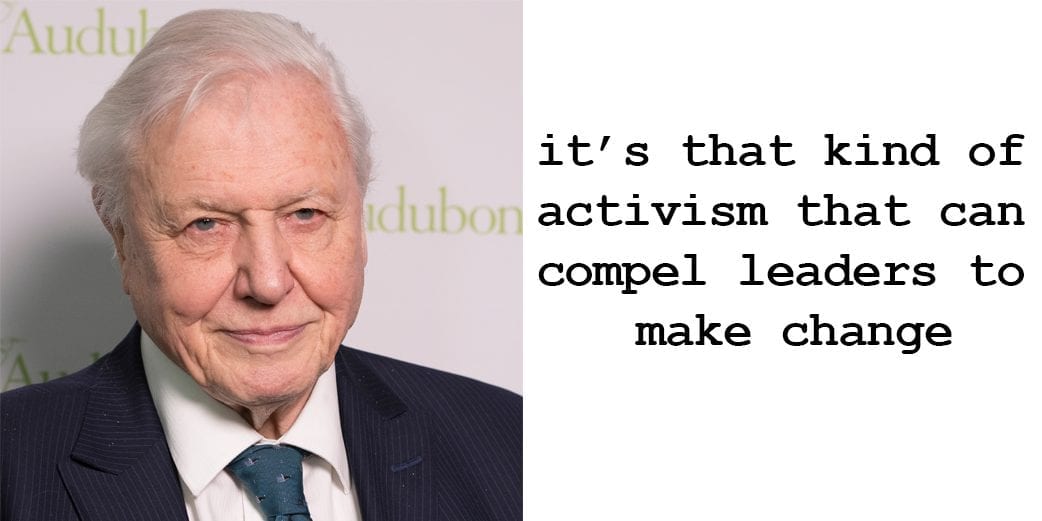 Sir David Attenborough has voiced his support of young people protesting against climate change, saying ‘it’s that kind of activism that can compel leaders to make change’.

The world’s most renowned natural historian has been vocally supportive of Thunberg and her movement for calling out politicians for their inaction towards climate change.

In an interview with Triple J ahead of the global climate strike last Friday, he said: “Young people see things very clearly. And they are speaking very clearly to politicians.

“They [people under 18] may not have the vote … but it’s their world that’s coming along and they want to make it clear to the politicians that they know that.

“If they just sit on the sidelines, and [debate] in a nice, reasonable way, you know, they’ll say, ‘oh kids’. But if they actually do something in the way that they have been doing in this era, then politicians have to sit up and take notice.

“They are important. They are the people who are going to inherit the mess that we’ve made.”

David Attenborough said he was privileged to see an environmentally conscious uprising.

He is currently filming for a new BBC documentary called Extinction: The Facts, in which “World-leading scientists will explore why (plant and animal) species are disappearing at such an alarming rate and will ask what that means for humanity”.

He said:  “Do you think it’s right that we go on destroying the natural world?

“We have to convince bankers and big business that, in the end, the long-term future lies in having a healthy planet. And unless you do something about it … you’re going to lose your money.”

The BBC presenter’s words of praise come as Thunberg attracts worldwide praise for her climate efforts following a powerful speech at a UN summit.

But others have used the opportunity to put down the 16-year-old Swedish activist. In a recent interview, Fox News guest Michael Knowles described her as a ‘mentally ill Swedish child’ who he said was being used by her parents and the left.

How much influence can David Attenborough’s activism have? Share your thoughts in the comments section below!