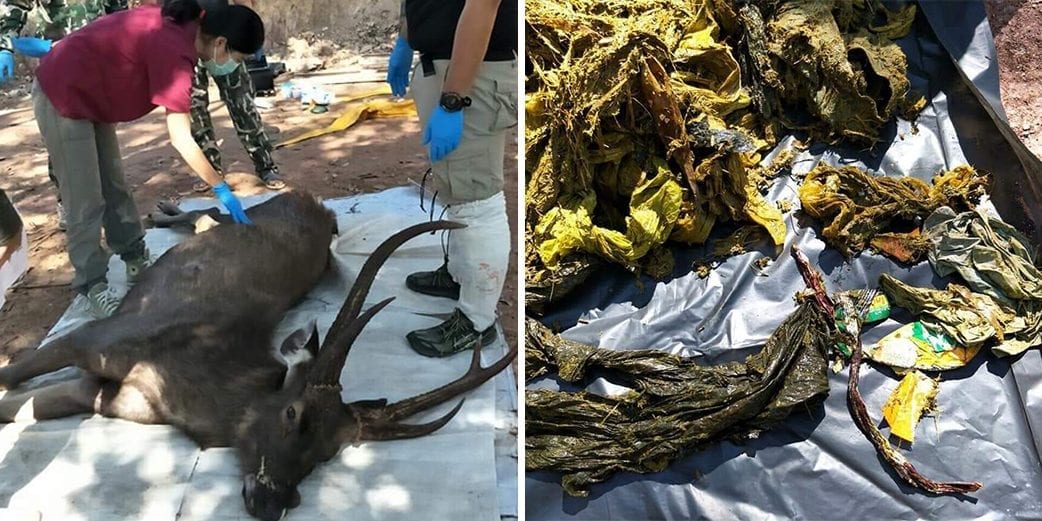 A 10-year-old wild stag has died in Thailand with over 7 kilograms of plastic bags and other waste in its stomach, say officials.

Thailand’s massive plastic pollution has taken yet another animal’s life.

After losing a sick baby dugong to an infection caused by pieces of plastic lining her stomach, a deer was found dead in a national park in Nan province, north of the capital Bangkok.

Speaking to BBC News Thai, Kriangsak Thanompun, a director at the National Park, Wildlife and Plant Conservation Department said:  “We believed it had been eating those plastics for a long time before it died.

“Officials [believe] the plastics had blocked up its alimentary canal [but a] further investigation [will be] launched.”

Kriangsak admitted the deer’s demise was “another tragedy” that had happened in recent times.  “It shows we have to take seriously and reduce… single-use plastic.”

He added that the park would instate a “three-phase plan” and waste management committee to drive cleanliness, manage waste issues and educate the public on the implications of littering.

A 2015 report by the Ocean Conservancy and the McKinsey Center for Business and Environment revealed that China, Indonesia, the Philippines, Thailand and Vietnam were responsible for more than 50 percent of the plastic cramming the oceans.

The Thais are said to use up to 3,000 single-use plastic bags and an estimated 30 percent of 45 million plastic bags used in the country come from supermarkets, convenience shops and department stores.

Several major retailers have now pledged to stop handing out single-use plastic bags from January 2020 and some have even started  experimenting with different environmentally-friendly forms of packaging.

The country’s biggest supermarket chains including Lotte Mart, Saigon Co.op and Big C have started using banana leaves in place of plastic to reduce their contribution to the waste.

What else can countries do to reduce plastic pollution? Share your thoughts in the comments below!