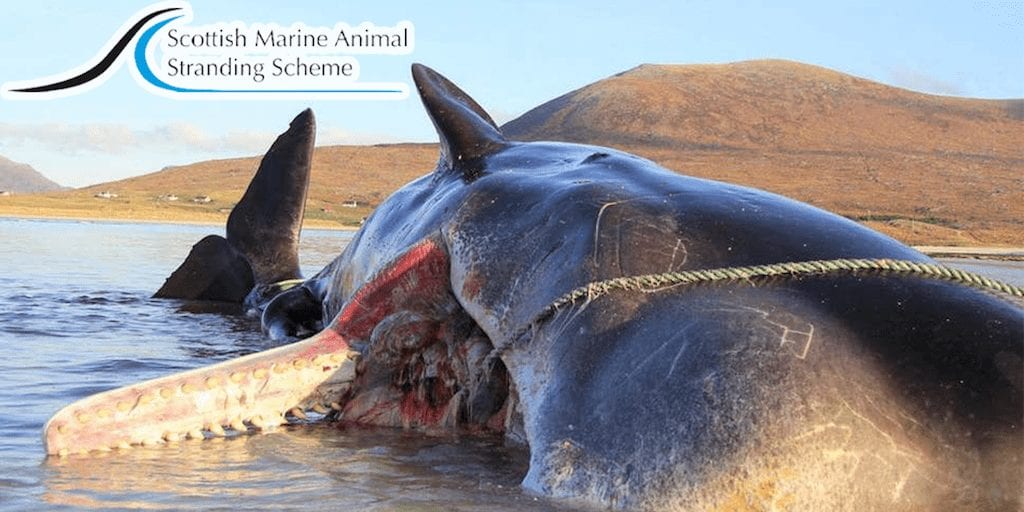 A young sperm whale has been found dead on a Scottish beach with over 100kgs of plastic trash entangled into a tight ball in its stomach.

The dead whale was found stranded on the sandbanks of Luskentyre Beach on the Isle of Harris in northern Scotland by locals.

The Scottish Marine Animal Stranding Scheme (SMASS) experts removed about 100 kgs worth of nets, bundles of rope, plastic cups, bags, gloves, packing straps and tubing from the whale’s stomach while dissecting it to determine the cause of death.

“All this material was in a huge ball in the stomach, and some of it looked like it had been there for some time,” said the group that investigates the deaths of whales and dolphins stranded on Scottish coastlines.

While the expert group couldn’t pinpoint a definite cause and noted that the animal otherwise appeared healthy, a post on the group’s Facebook page read: “Whilst it is certainly plausible that this amount of debris was a factor in its live stranding, we actually couldn’t find evidence that this had impacted or obstructed the intestines,”.

“This amount of plastic in the stomach is nonetheless horrific, must have compromised digestion, and serves to demonstrate, yet again, the hazards that marine litter and lost or discarded fishing gear can cause to marine life,” it added.

Dan Parry, a local present at the site told BBC: “It was desperately sad, especially when you saw the fishing nets and debris that came out of its stomach.

“We walk on these beaches nearly every day and I always take a bag to pick up litter, most of which is fishing-related.

“This stuff could have easily been netting or the like lost in a storm, we just don’t know, but it does show the scale of the problem we have with marine pollution.”

According to SMASS, the thrash seemed to come from both land and fishing sectors and “could have been swallowed at any point between Norway and the Azores.”

The coastguard and members of the Western Isles Council helped SMASS in conducting the examination and later dug a hole to bury the mammoth creature.

SMASS reports that the number of sea creatures being stranded on UK beaches has risen with more than 930 whales and dolphins found washed up in 2018.

According to the UK Cetacean Strandings Investigation Programme (CSIP) data, a total of 4,896 animals have been reported dead on beaches between 2011 and 2017, 15 per cent more compared to the previous seven years.

What measures should governments take to curb plastic pollution? Share your thoughts in the comments below!