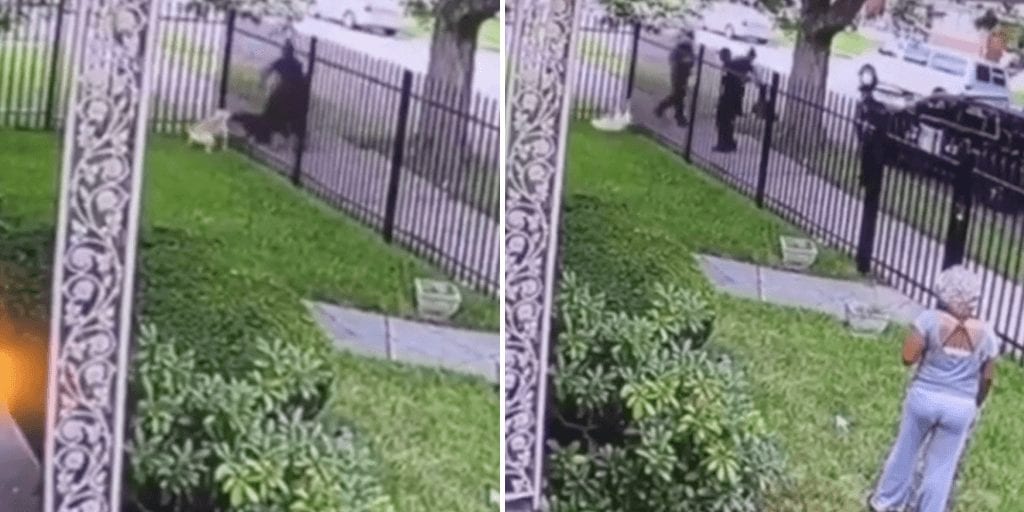 In the video, a Detroit police K9 gets into a fight with a fenced-in pit bull in its own yard.

An upsetting home video shows a Detroit police officer mercilessly shooting a dog in the head while the dog was confined within the fence of its owner’s property.

The disturbing incident happened as the cop’s K9 walking along a residential sidewalk during a neighborhood’s yard search for a suspect’s weapon clashed with a medium-sized white pit bull.

Footage captured on a Ring doorbell shows the two dogs running together on opposite sides of the fence. The K9 officer is then seen approaching the gate and the white dog pouncing on the K9’s snout through the wrought iron fence rails. In the next instant, the officer is seen reaching for her gun and firing a single shot to the dog’s head without any other attempt to rescue the fighting dogs.

The graphic video also captures the dog writhing in pain and floundering before bleeding to death from the gunshot wound.

Needs to be held accountable

The video posted on Instagram by Animal Hope and Wellness, which has subsequently gone viral on social media has sparked an outrage with Animal rights organizations and dog lovers demanding the errant police officer be reprimanded.

The charity wrote: “This happened in Detroit, with footage being caught on a home camera system. The video is extremely upsetting – which shows Detroit police shooting a dog in the face and killing him.

“The officer responsible for the act needs to be held accountable.”

A post shared by Animal Hope and Wellness (@animalhopeandwellness)

However, the Detroit police maintained the officer was only following protocol.

“Her partner was being attacked and we demand that our officers protect not only themselves but their partners and citizens,” Police Commander Darin Szilagyi told the Detroit Free Press.

“At this point it was a clear and present danger; her dog was being viciously harmed.

“It’s unfortunate it came to this, we don’t like to see any animal hurt.”

The police added that before conducting the illegal weapon search, they had approached the white dog’s yard and asked the homeowner to tie the pit bull so they could carry out the search and had decided to move on to the next yard to allow the owner time to secure its pet.

Szilagyi added the situation was beyond control and mandated the use of force.

“This was a life or death situation,” he explained, adding “that is the option that a police officer has to use, and I commend the officer for making a decision and coming back to work and taking care of her partner”.

The officer is said to have resumed her job after some counselling.

Share this story: Graphic video shows Detroit cop mercilessly shoot pet dog in its own yard after it clashed with a K-9.