Disturbing footage shows conscious lambs chucked, stamped on and slaughtered without being stunned 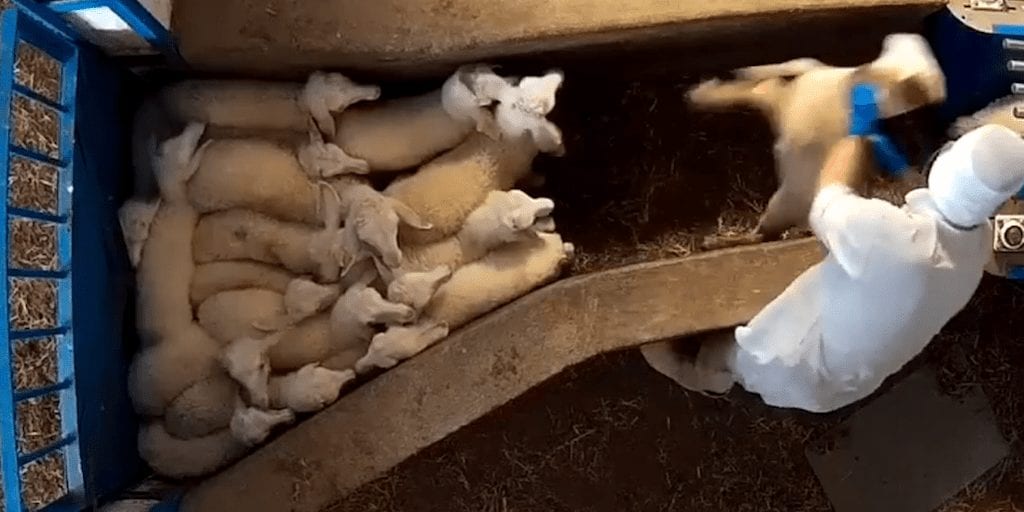 Secret CCTV footage has exposed horrific abuse of lambs at a slaughterhouse, where workers are seen stamping on animals’ heads, throwing and killing them without being stunned.

Lambs are sent down conveyor belts and hung up among dead animals while still conscious at the slaughterhouse in Spain.

Activists set up secret cameras to expose the truth of the industry as they fight to force through a law requiring mandatory CCTV cameras at all slaughterhouses.

Animal rights group NGO Equalia published the footage, which was filmed over a four month period. Animals are seen in a decrepit state, so ill they can barely stand at the farm near Madrid.

WARNING: The below video contains graphic imagery which viewers may find upsetting

A spokesman for the NGO said: “The images speak for themselves; lambs are thrown, kicked and beaten and a worker repeatedly throws himself on them.

“Several lambs are slaughtered without being stunned, even though the stunner remains next to one of the operators.

“The slaughterer disregards his duties and some lambs are not bled and are left hanging next to the rest of the dead animals.

“One of them was left fully conscious for at least half an hour.

“The video also shows sheep that can’t stand up or are sick and are taken to the conveying belt to enter the bleeding zone.

“One of them was filmed agonising the night before. Ten hours went by before it was taken to the slaughter area.

“By law an animal that can’t walk should not be dragged or transported to the slaughter area but slaughtered in situ, wherever it is.”

The slaughterhouse is believed to be under investigation by authorities in Spain thanks to the footage.

An owner said the claims by NGO Equalia are ‘all lies’ and that all animals are stunned before slaughter.

“They’ve published things that are not true. They’ve taken 100 hours of footage and only published the little bits they were interested in,” he said on Spanish TV.

The owner said a worker was under investigation due to some irregularities in the footage, but said all animals are killed ‘in a lawful way’.

“This is an attack. The most irregular thing that’s happened here is that someone’s entered these premises and filmed without permission,” he added.

Should CCTV cameras be mandatory in all slaughterhouses? Share your thoughts in the comments section below!