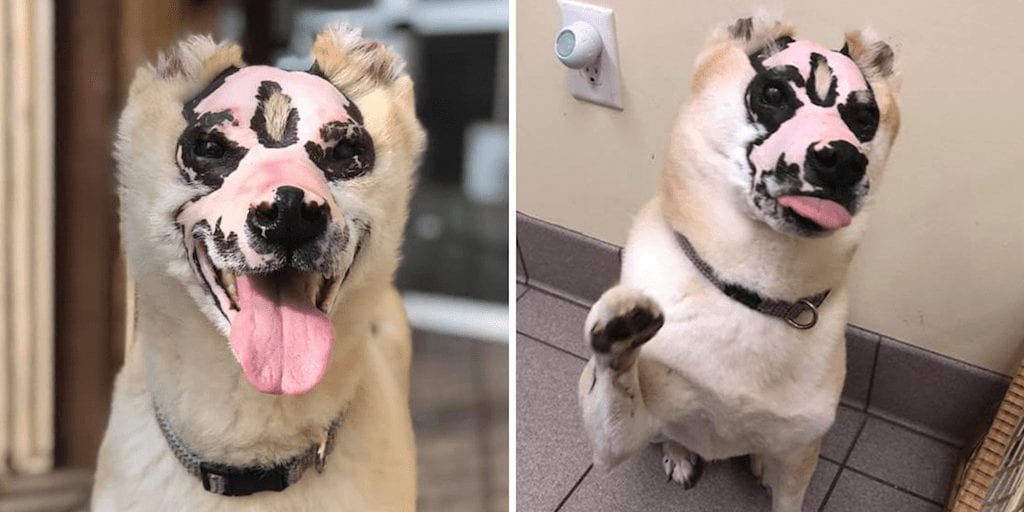 A freak accident left Taka scarred for life after suffering severe burns, but his resilience has helped him recover and he is now an official therapy dog in a local burn unit.

In a tragic event last October, a fire broke out in Taka’s room in Georgia. While the family barely evacuated the flaring home, they couldn’t rescue Taka.

However, Taka awoke just in time and survived the ordeal by running through the flames. But he was grievously injured with the fire disfiguring his face and other parts of his body.

He was rushed to Care More Animal Hospital where vets tended to his injuries.

Taka recovered rapidly and was soon ready to go to a foster home, but the vets in the hospital couldn’t bear to part with him.

Later his vet Crystal Lesley adopted him but the furball couldn’t cope with Lesley’s other dogs and started displaying aggressive behaviour.

“I didn’t know if I was going to be able to keep Taka and it was breaking my heart,” Lesley told WRDW News.

But as luck would have it, she was referred to Mandy Foster- the founder of Canine Foster Project- to enroll Taka to become a therapy dog for the burn centre.

Although Taka was an old dog, Foster was encouraging stating: “They can be trained just like any other dog.

“Sometimes it takes a little bit longer, but in Taka’s case he’s nine years old and he has flown through his training.

“He’s brilliant. I knew that there were some problems, some challenges that were happening, and I wanted to get in there and help.”

Foster has been pleased with his progress.

“He’s got the right temperament for it,” she said.

“Of course, he has the scars to show for it and he can relate to a lot of the people there so I think it’s going to benefit both him and the patients there.”

“I am so incredibly proud of him,” said an ecstatic Lesley.

“Just thinking back to how far he has come and where he is now, is just so emotional.  The amount of love and respect I have for him is profound.

“To see that he could be an encouragement or at least a light at the end of the tunnel for a child or anybody that has gone through what he’s gone through is what all of this is about,” she added.

Foster is now looking forward to begin Taka’s next stage of training as a specialist dog and is excited about his potential for the future.