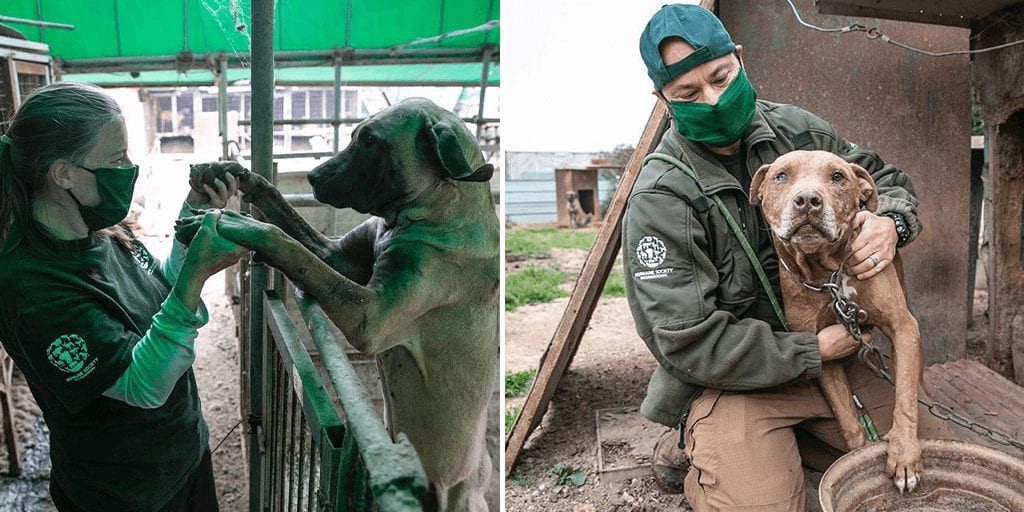 “Although most people in South Korea don’t regularly eat dog meat, there remain thousands of farms of all sizes across the country where dogs of all breeds endure a harsh existence.”

The rescue operation is part of The Humane Society’s mission to combat the brutal dog meat trade in the country and find new homes for the rescued animals.

According to HSI, 170 of the dogs were rescued from a single dog meat farm closed down by the charity in partnership with the farmer.

The other 26 dogs were rescued from a previous dog meat market and farm rescue operations but had not been able to leave their South Korean temporary shelter until now due to COVID-19 travel restrictions.

HSI has successfully rescued over 2,000 dogs and closed down 17 dog meat farms in South Korea since 2015.

While an estimated 2 million dogs are reared on thousands of South Korean dog meat farms annually, a new Nielsen conducted opinion poll shows a growing number of South Koreans in support for a ban on dog meat consumption.

The poll, commissioned by Humane Society International/Korea, shows that 84% of the population don’t or won’t eat dogs, and almost 60% support a legislative ban on the trade.

‘The writing is on the wall’

Kelly O’Meara, HSI’s Vice President of Companion Animal Campaigns, said: “Although most people in South Korea don’t regularly eat dog meat, and support for a ban is growing, there remain thousands of farms of all sizes across the country where dogs of all breeds endure a harsh existence.

“With fewer people wanting to eat dog, farmers can see the writing is on the wall for this dying industry and so they work with HSI to find a solution that gives both them and their remaining dogs a chance of a new life.

“With such interest from dog farmers, and public support, we hope the Korean government will adopt this type of approach to phase out the dog meat industry for good.”

The 196 dogs were flown into Dulles Airport this weekend and are now receiving veterinary treatment, proper food, and love – an emotion they’re probably experiencing for the first time in their lives – at local animal shelters or at a temporary shelter run by HSI and the Animal Rescue Team of the Humane Society of the United States, with assistance from RedRover.

Organisations taking in the rescued dogs include:

‘Fosters have been really wonderful’

Petey and Furends Animal Rescue Founder, Stephanie Arrington, said they were able to rehome 4 of the dogs with loving foster families.

“A lot of it is just giving [the dogs] the space to make the decision to approach and to eat and things like that,” Arrington said.

“Our fosters have been really wonderful, and we’ve already gotten some great reports from the guys that came in yesterday.”

Share this story to let others know about HSI’s efforts to close the dog meat industry in South Korea.