Dominos immediately sells out of vegan beef after launch in Australia 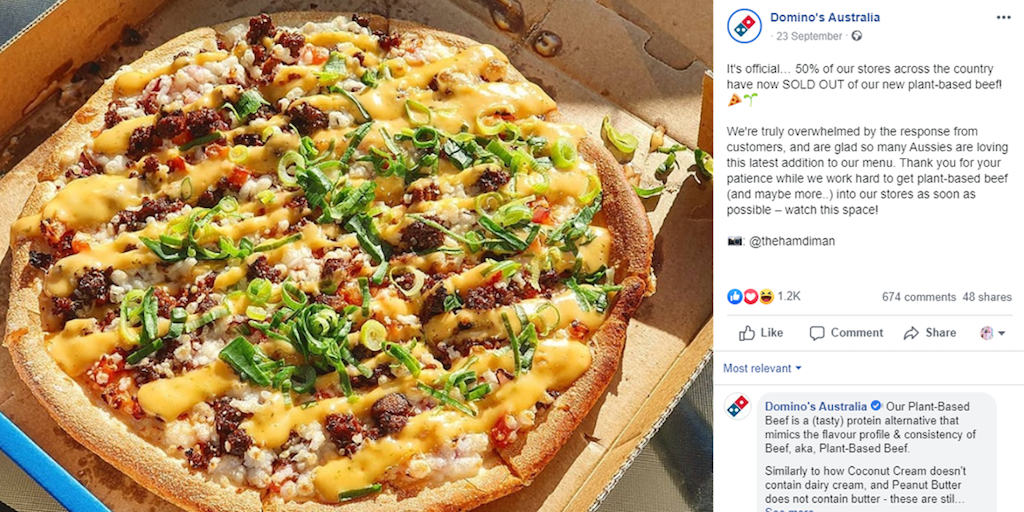 A new vegan beef topping at Domino’s has proven a major hit in Australia, with stores across the country immediately selling out.

The takeaway pizza giant reported huge demand for its plant-based beef, and celebrated a successful debut on the market.

Domino’s Australia posted on its Facebook page: “It’s official … 50 percent of our stores across the country have now sold out of our new plant-based beef.

“We’re truly overwhelmed by the response from customers, and are glad so many Aussies are loving this latest addition to our menu.

“Thank you for your patience while we work hard to get plant-based beef (and maybe more) into our stores as soon as possible.”

The pizza company has expanded its vegan range after introducing vegan cheese to its menu last year, responding to popular customer demand.

Global Development Chef, Michael Treacy stated that the brand carried out considerable research to develop a quality product that appealed to its customers’ preferences.

He said: “We tried and tested hundreds of flavors and variations from around the world before settling on a plant-based ‘beef’ which has a similar taste and texture to our existing beef – with a rich, savory flavor that’s mouth-wateringly good!

“We didn’t want to rush the process only to deliver a lesser quality product. So we challenged our partners to develop a product that not only tastes great but that our customers won’t have to pay more for.”

Which is your favourite vegan pizza brand? Share your thoughts in the comments section below!