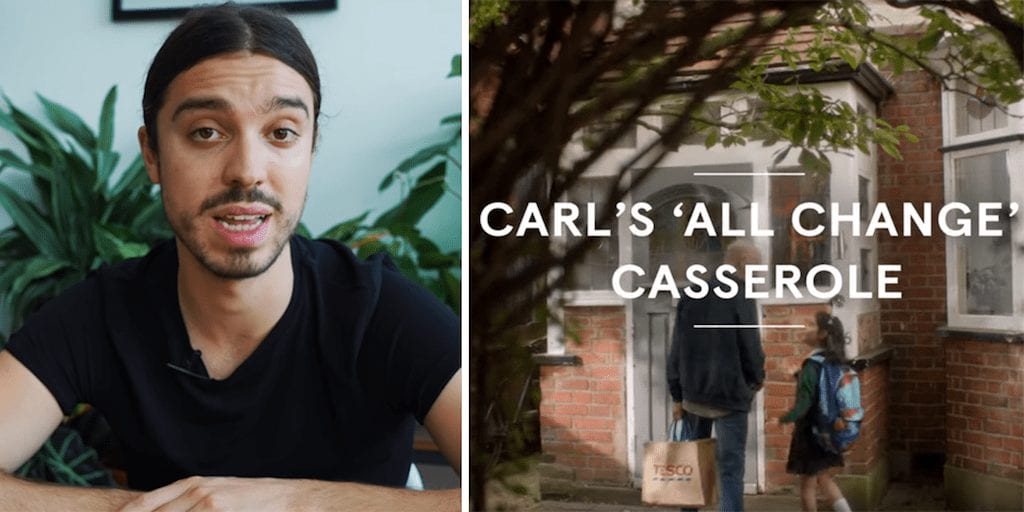 Earthling Ed has hit back at meat industry leaders for their hysterical reactions to a new Tesco advert for vegan sausages.

The ad for Tesco Plant Chef Meat-Free Cumberland-style Bangers features a dad who says ‘I bloomin’ love my meat’.  But his daughter tells him ‘I don’t want to eat animals anymore’ and he compromises by making a sausage casserole using Tesco’s plant-based range.

“It’s just as tasty as it used to be” he says as they tuck into their meal, before the daughter replies “better actually”.

The National Farmers Union slammed the advert, saying it ‘demonizes meat as a food group’.

President Minette Batters wrote to the supermarket and said: “The NFU is clear that food and nutrition must be looked at as a whole, rather than food groups in isolation.

“We believe it is vital that children do not establish misleading views of food groups, which may later affect their health and diets.”

Bur vegan activist Earthling Ed has hit back against the reaction of meat industry leaders and mainstream media with a video posted on his YouTube channel.

“All that happens in the video is a daughter goes to her father and tells him she doesn’t want to eat animals,” Ed says.

“How can that possibly demonize meat as a food group?

“The only word I can think that she [Minette Batters] possibly has a problem with is the word animals – the fact that Carl’s daughter refers to eating meat as consuming animals.

“But that’s exactly what it is. Meat is animal flesh. Meat comes from animals. I mean for goodness sake Minette, you are an animal farmer. Why are they afraid of people objectively stating what meat actually is?

“The animal industry is incredibly fearful that people make associations between the language and what actually happens in reality.”

What do you think of the new Tesco advert? Share your thoughts in the comments section below!