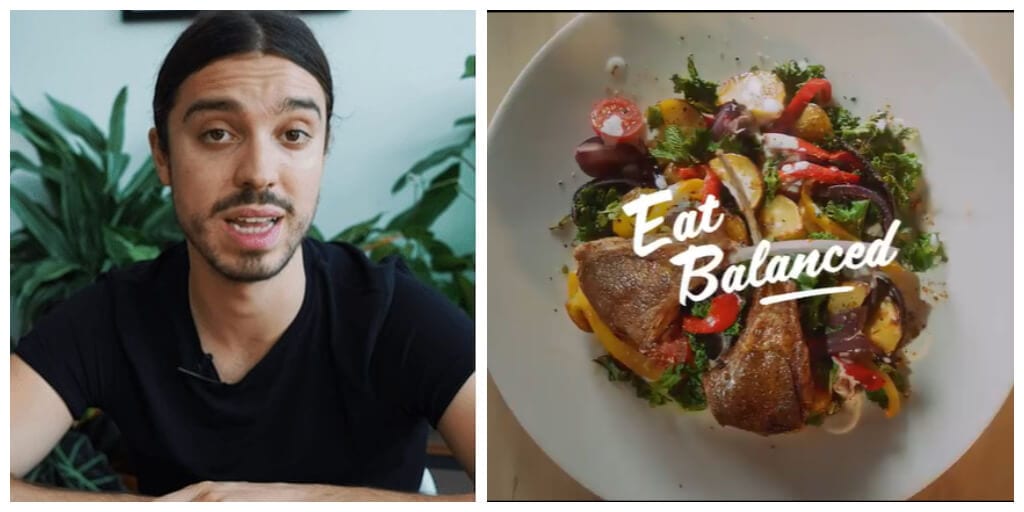 Earthling Ed has recreated an ‘honest’ remake of AHDB’s pro-meat advert to ‘show the reality behind these industries’ and encourage people to eat plant-based.

Earthling Ed has slammed a new UK campaign that encourages people to eat meat and dairy.

The Agriculture and Horticulture Development Board (AHDB) – a pro-animal farming levy board -has started a ‘We Eat Balanced’ campaign in a bid to provide an ‘evidence-based antidote to the misinformation’ around food and nutrition.

The new £1.5 million advertisement campaign currently on air on British television aims to ‘highlight the nutritional benefits of enjoying red meat and dairy while showcasing the UK’s world-class standards in food production and sustainability’.

According to AHDB, meat and dairy are essential components of a healthy balanced diet, especially since it claims that ‘UK farmers are united in their ambition to bring high-quality, naturally nutrient-rich produce to people and are continuously driving towards a carbon-neutral food industry with high welfare standards at its heart’.

The advert launched on 4th January has three different endings featuring dishes using beef, lamb, and pork and all with a dairy accompaniment.

‘Enjoy the food you eat’

Speaking about the campaign, AHDB’s Chief Marketing and Communications Officer Christine Watts said: “In Britain, we have so much to be proud of when it comes to the food we eat, how it is produced and the entire journey from farm to fork.

“Our farmers operate to some of the highest standards in the world and this campaign aims to balance the negative commentary around farming as well as the importance of eating red meat and dairy as part of a balanced and healthy diet. AHDB is championing a message with consumers for a bright new year – eat balanced: enjoy the food you eat.”

The advert is baseless on several counts. Firstly, it ignores that  73% of livestock animals are factory farmed in the UK, and not grass-fed.

Secondly, it endorses meat and dairy consumption during a pandemic and a climate emergency, when leading infectious disease experts and climate scientists have repeatedly spotlighted animal farming’s role in creating future pandemics and in destroying the planet.

Lastly, it states that meat and dairy contain all the essential nutrients our bodies need – a statement that has been proved otherwise by several scientific pieces of research.

Earthling Ed, who criticized the ad for being a ‘woefully inadequate and poorly executed response to the success of Veganuary’, wrote on Instagram that AHDB’s effort ‘defies the science and perpetuates the needless suffering of animals’.

‘Time to change the food we eat’

In response, he has created an ‘honest’ remake of the advert to show ‘to show the reality behind these industries’ and encourage people to eat plant-based.

“We’ve all got a lot on our plates right now,” Ed’s advert states.

“But here’s something you don’t want to ignore.

“The story of a food so unethical it takes the life on an animal, destroys the environment we humans rely on, and then in return creates something terrible. A product containing cholesterol and saturated fat that can cause disease: meat and dairy.

“It’s time to change the food we eat. Eat plant-based.”

Earthling Ed added on Instagram that he has also paid for it to be advertised to as many people as possible on YouTube.

“At least that way hopefully many of the people who have seen the AHDB advert, will also see this one as well.”