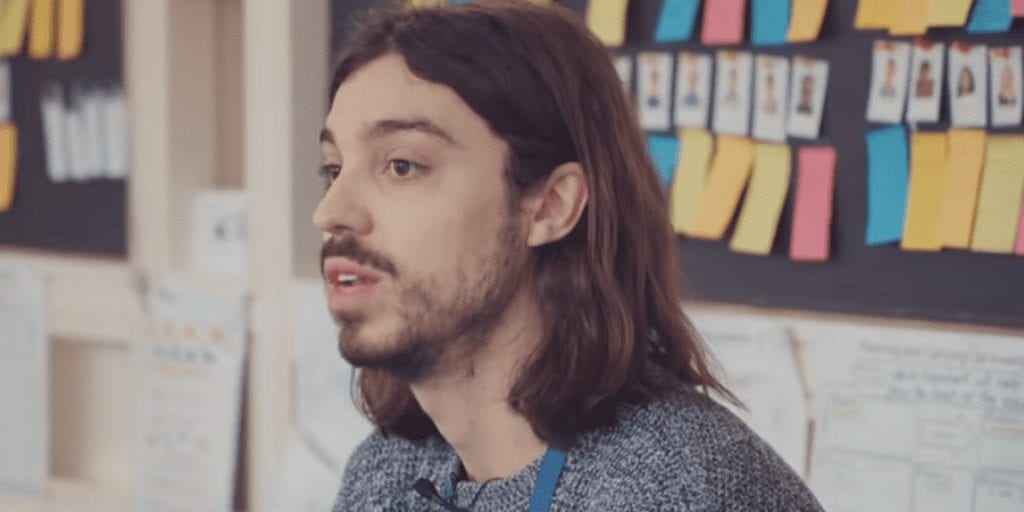 Activist Earthling Ed taught a lesson on veganism at a school in Holland. Image: Earthling Ed

Earthling Ed has taught an inspiring lesson to a class of 10-year-old children in Holland to educate them about the reality of climate change.

Ed arrived at the school during Vegetarian Week to ‘raise a little bit of awareness for how our food does impact our environment’.

“What we eat three times a day can be potentially really damaging and we don’t even think about it,” he explained in an empowering session.

The activist opened the talk, which he uploaded onto his YouTube page, by asking the children if they had heard of climate change, and what the major causes are.

One clued-in kid gave the answer ‘CO2 emissions’ which she said comes from gasoline and aeroplanes.

Another smart child answered ‘methane’ which they explained comes from ‘animal waste’, leaving Ed impressed with both answers.

The activist then explained that methane produced from animals is 20-26 times worse for climate change than carbon dioxide.

Ed asked why else farming animals might be bad for the environment, and one child responds: “Because you’re taking animals and you’re forcing them to be in cages and be separated, and the animals don’t like it.

“And lots of people don’t like how the animals are trapped and don’t get to see light most of the time.”

Ed nodded along and said ‘so there’s the ethical argument as well, which is why I went vegan to begin with’.

“Say we have an area and that area is full of trees, and we want to graze animals on that land and we want to build barns to put animals in, what do we have to do with the trees?

“Cut them down to make space, and what’s the problem with cutting down trees?

“We’re in a situation where we’re having to chop down a huge amount of forests and lands and habitats, all those trees absorb carbon.”

Ed then discussed studies from the United Nations about the risks of climate change, and from the University of Oxford about farming and the environment.

“If the world went vegan we could reduce the amount of agricultural land, so farming land, by 75 percent and we could still feed every human on the planet, which means all of a sudden we have so much more land we can dedicate to growing trees,” he said.

“It would be so amazing for animals in the wild, but it would also be so good for absorbing those greenhouse gases that we desperately need to get rid of.”

One child asked how we can feed the growing population if we stop eating animals, and the activist explained that all the billions of animals we eat also need to be fed throughout their lives – so we need land for crops to feed them.

‘Take animals out of the equation’

“It would be a better use of land and the crops that we grow if we take animals out of the equation and just gave all that food straight to humans,” he explained

Ed told the kids that if we do get to the predicted population of 10 billion people by 2050, we could still feed the population with the land we use now for animal agriculture.

“Farmers only breed these animals into existence because we buy them,” he continued.

“As the number of vegans rises, very slowly probably over a period of decades, the number of animals we breed into existence will slowly decline as well because farmers won’t breed animals that they can’t sell.”

One child asks if farmers will lose their jobs if the world turns vegan, and Ed suggests they switch to plant farming, and governments switch farming subsidies to support plant-based farmers.

What do you think of Earthling Ed’s talk with 10-year-olds? Tell us in the comments section below!