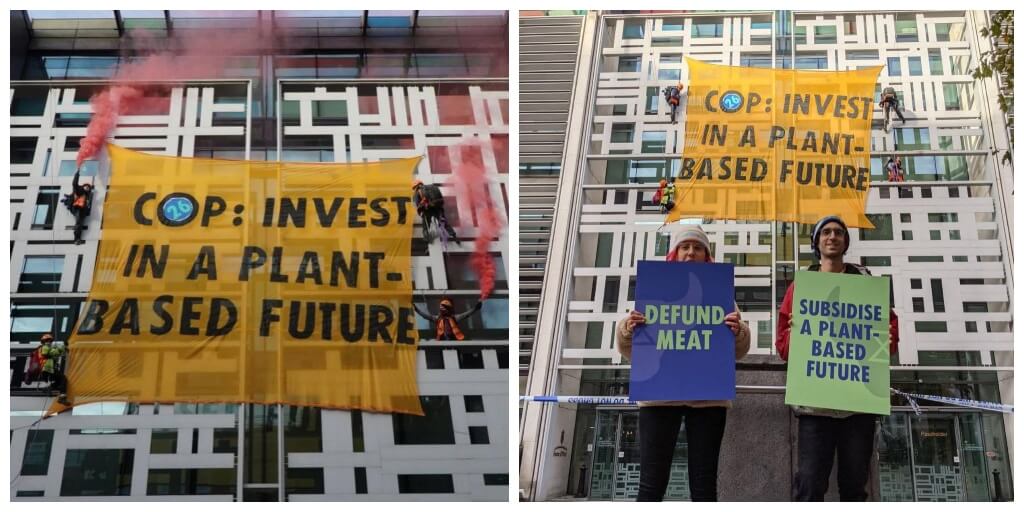 “We need system change if we’re going to do what’s needed to protect the planet and all life as we move forward into an uncertain future.”

Four Animal Rebellion demonstrators climbed the government building shared by DEFRA and the Home Office in Westminster early Tuesday morning and unfurled a large banner that said “COP26: Invest in a plant-based future”.

The demonstration, which comes ahead of COP26, to be held from 31 October to 12 November in Glasgow is to demand that UK Prime Minister, Boris Johnson, pledges to commit and urge all attending world leaders to end meat and dairy subsidies.

The sister organization of Extinction Rebellion in a post on Instagram said: “We need system change if we’re going to do what’s needed to protect the planet and all life as we move forward into an uncertain future.

“The government no longer represents the needs of the people which means we need to unite and demand the change we know is necessary. It’s time to rise.”

Earlier this year, the UK government set the world’s most ambitious climate change target into law to reduce emissions by 78% by 2035 compared to 1990 levels.

However, to meet this target, apart from other things, the Committee on Climate Change (CCC) says emissions from agriculture need to be cut by 30% between 2019 and 2035.

This means, each person living in the UK will need to change their eating habits within five years to cut meat and dairy consumption by at least 10%.

‘Hypocrisy has to end’

Despite CCC’s recommendations, according to Animal Rebellion and Greenpeace, the UK Government spends at least £1.5billion per year subsidising livestock farming.

This is around 50% of its agricultural subsidies and ten times the country’s annual budget for planting trees.

Moreover, the UK has only committed £90million in research and development for the alt-protein sector despite a huge rise in demand for plant-based proteins.

Animal Rebellion spokesperson Bel Jacobs added: “The UK Government is simultaneously saying that it is a world leader in climate change whilst propping up the unsustainable and unprofitable meat and dairy industry, one that emits disproportionate amounts of greenhouse gases.

“This hypocrisy has to end – we need to defund meat and subsidise plant-based alternatives instead.”