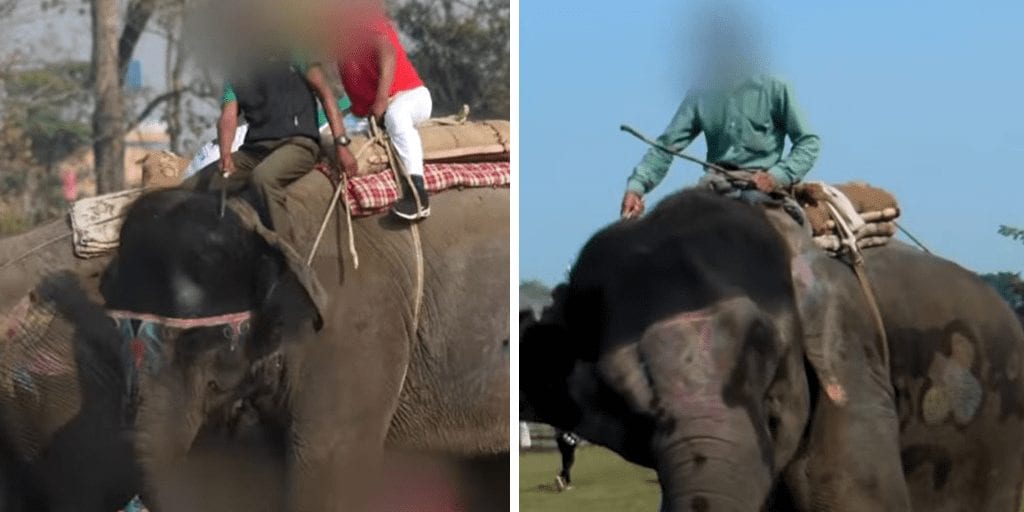 Animal rights activists have released disturbing footage of elephant handlers beating animals with bullhooks to force them to perform for tourists at a festival in Nepal.

The upsetting imagery from the Chitwan Elephant Festival reveals how chained elephants are abused with sharp metal hooks to make them play football or give rides to tourists.

Workers are also seen violently pulling on the elephants’ sensitive ears, beating them with sticks and stabbing them with wooden knives.

PETA explained how handlers ‘beat one elephant mercilessly for almost a minute in full view of tourists’.

In one particularly shocking section of the footage, a handler can be seen jabbing the sharp end of a bullhook into the back of a baby elephant’s ear. In another incident an elephant is seen being stabbed in the back of the head.

“To make elephants perform, their spirits must first be broken. Even baby elephants aren’t spared this horrific cruelty,” PETA explained in the video.

Elephants are also seen with horrific scars and bloody wounds. The video can be watched below.

When they are not taking part in the festival, the elephants are still exploited in the animal tourism industry. They are kept in captivity in often poor conditions and forced to give tourists exhausting rides in boiling temperatures.

PETA has urged animal lovers across the world to write to authorities to demand an end to cruel practices at the Chitwan Elephant Festival. The group has created an online form which can be sent to municipalities which are funding this year’s ‘games’.

Share this article to reveal the truth behind the animal tourism industry and help bring an end to animal abuse at the Chitwan Elephant Festival. What do you think of the festival? Share your thoughts in the comments section below!